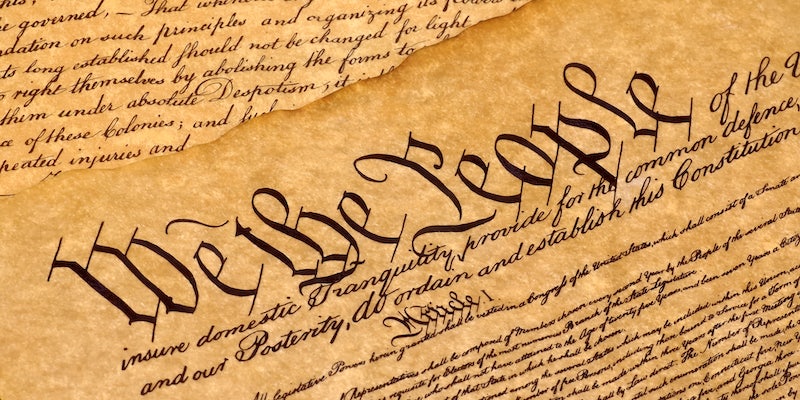 'The Blueprint for an AI Bill of Rights is a guide for a society that protects all people from these threats.'

The White House on Tuesday unveiled a series of guidelines aimed at protecting the American public from burgeoning technologies that utilize artificial intelligence (AI).

The guidelines, referred to as the “Blueprint for an AI Bill of Rights,” focus specifically on AI-related issues such as data privacy and biased algorithms.

The blueprint, introduced by the White House Office of Science and Technology Policy, provides tech companies with five principles “that should guide the design, use, and deployment of automated systems.”

“The Blueprint for an AI Bill of Rights is a guide for a society that protects all people from these threats—and uses technologies in ways that reinforce our highest values,” a press release says. “Responding to the experiences of the American public, and informed by insights from researchers, technologists, advocates, journalists, and policymakers, this framework is accompanied by From Principles to Practice—a handbook for anyone seeking to incorporate these protections into policy and practice, including detailed steps toward actualizing these principles in the technological design process.”

The first principle surrounds “Safe and Effective Systems” and calls for automated systems to be “developed with consultation from diverse communities, stakeholders, and domain experts to identify concerns, risks, and potential impacts of the system.”

“Systems should undergo pre-deployment testing, risk identification and mitigation, and ongoing monitoring that demonstrate they are safe and effective based on their intended use, mitigation of unsafe outcomes including those beyond the intended use, and adherence to domain-specific standards,” the guideline states. “Outcomes of these protective measures should include the possibility of not deploying the system or removing a system from use.”

The second principle outlines “Algorithmic Discrimination Protections” in an effort to shield individuals from being treated differently based on classifications protected by law including race, color, ethnicity, sex, religion, age, and national origin.

“Designers, developers, and deployers of automated systems should take proactive and continuous measures to protect individuals and communities from algorithmic discrimination and to use and design systems in an equitable way,” the press release added.

Data privacy is also listed among the five principles. Data collection, according to the White House, should conform “to reasonable expectations” and only target information that is “strictly necessary.”

Companies are urged to seek users’ permission “regarding collection, use, access, transfer, and deletion of your data.”

The fourth principle, titled “Notice and Explanation,” argues that users should know whether an automated system is being used by a company in the first place by providing “generally accessible plain language documentation” that includes “clear descriptions” of how the system functions.

“Automated systems should provide explanations that are technically valid, meaningful and useful to you and to any operators or others who need to understand the system, and calibrated to the level of risk based on the context,” the White House said.

The fifth and final principle is listed as “Human Alternatives, Consideration, and Fallback” and states that users should be able to opt out of automated systems “in favor of a human alternative.”

“You should have access to timely human consideration and remedy by a fallback and escalation process if an automated system fails, it produces an error, or you would like to appeal or contest its impacts on you,” the blueprint says. “Human consideration and fallback should be accessible, equitable, effective, maintained, accompanied by appropriate operator training, and should not impose an unreasonable burden on the public.”

The White House argues that the five principles, if applied, can “form an overlapping set of backstops against potential harms.”

“This purposefully overlapping framework, when taken as a whole, forms a blueprint to help protect the public from harm,” the press release said. “The measures taken to realize the vision set forward in this framework should be proportionate with the extent and nature of the harm, or risk of harm, to people’s rights, opportunities, and access.”