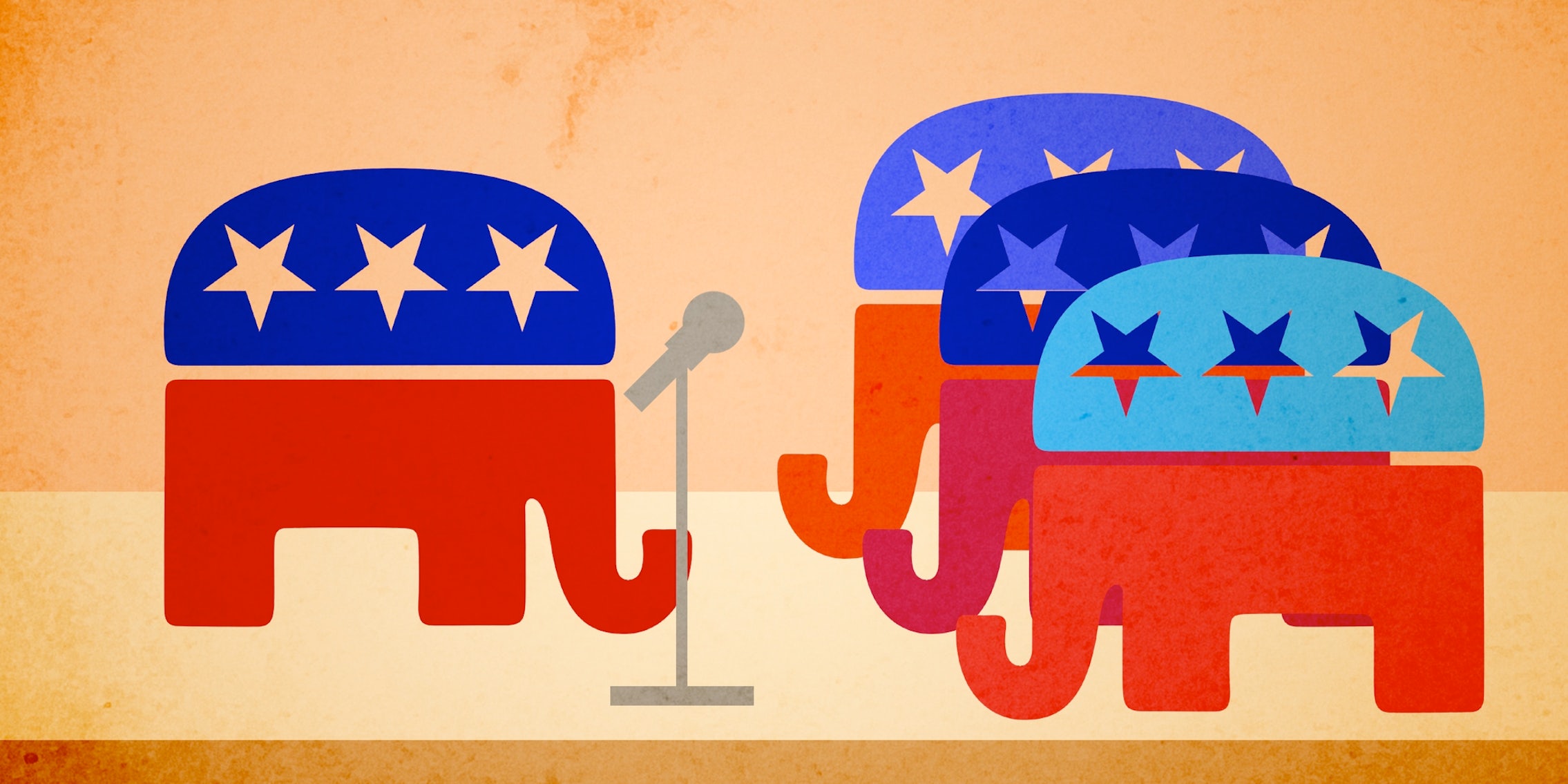 A voter’s guide to the Republican National Convention

Republicans gather in Cleveland on July 18.

This year’s Republican National Convention is set to seal the deal for Donald Trump. But the RNC Convention is a lot more than just picking a presidential candidate.

The future of Republican Party will be decided when party leaders and delegates gather in Cleveland July 18-21. Many predicted the 2016 RNC Convention would be a full-out disaster for Trump, but it’s shaping up to be better than expected.

An impressive list of Republican leaders, new and old, have signed on to speak at the convention, according to a list obtained Thursday by the New York Times. Even one-time opponents Sens. Ted Cruz (R-Texas) and Marco Rubio (R-Fla.) have signed on to speak (the latter via video). Infamous Indiana University basketball coach Bobby Knight, who famously threw a chair during a game in 1985 and was once arrested for assault, will also address the convention.

The Republican Party, which once seemed to be slightly embarrassed by Trump, is slowly coming to terms with the fact that the contentious real-estate tycoon will be the GOP nominee for president. The hope of a contested convention for the Never Trump movement is in the distant past. Any remaining doubt over Trump’s electability is likely to be extinguished (at least in the short term), by a New York Times/CBS poll that found Trump and Democratic rival Hillary Clinton locked in a dead heat for the first time this election cycle.

The 2016 Republican National Convention will likely be one of the most unconventional conventions in recent history. As in the past, delegates will vote on credentials, the party platform, and most importantly, make official their party’s nominee. But Trump has promised a “different kind of convention,” and there’s evidence to show that he’ll stick to his word.

Over the course of four days, we’ll hear speeches from both establishment Republicans like Senate Majority Leader Mitch McConnell (R-Ky.) and rising stars like Sens. Joni Ernst (R-Iowa) and Tom Cotton (R-Okla.). Silicon Valley billionaire Peter Thiel will also speak. Party old-timers such as former House Speaker Newt Gingrich will stand for applause once again. Benghazi will be the sole focus of an entire night. And brace yourself for a presentation on former President Bill Clinton‘s history of sexual improprieties.

Expect some last-minute surprises, controversies, and tensions to arise at this year’s RNC Convention. There’s an energy and vigor in Cleveland that hasn’t existed for a generation—thanks largely to the Cleveland Cavaliers giving the city its first sports championship in more than 50 years. Efforts to take down a LeBron James banner from the Quickens Loan Arena, the site of both the NBA finals and the RNC Convention, were widely rejected.

Recent shootings in Dallas and Orlando won’t make the RNC shy about their position on guns. Security fears have mounted ahead of the convention. There’s Matthew Jansen, an RNC delegate from York County, Pennsylvania, who plans on carrying a 9mm Glock at the convention. A biker gang of Trump supporters have promised to patrol the arena. While the U.S. Secret Service has placed a ban on guns inside the arena, protestors will be allowed to carry guns near the arena. (Cleveland Mayor Frank G. Jackson told reporters Wednesday that Ohio’s open-carry laws prevent him from placing a more thorough ban on guns.) Finally, legions of naked women holding mirrors will pose outside the arena for photographer Spencer Tunick.

The Daily Dot will be there covering the convention, protests, and more. So, what should we all be prepared for during the big Republican shindig? Here’s everything you need to know.

The convention opens on July 18. The first night will be the “Night of Benghazi,” featuring speakers like border patrol agents and former New York City Mayor Rudy Giuliani. Sen. Cotton is also expected to speak about the military and veterans.

The second day will feature the “roll call of the states,” during which Trump’s name will be officially placed in the convention. To get a rough idea of what that’s like, check out the video of the 2012 RNC Convention below:

The last night of the convention is usually when the nominee speaks, so expect the focus to be on Trump himself. Other speakers include Ivanka Trump, Peter Thiel, and RNC President Reince Preibus.

When does Trump get nominated?

There’s been some speculation about a last-ditch effort to prevent Trump from earning the nomination. As this infographic by the Wall Street Journal details, there are several steps the Rules Committee can take to block Trump’s nomination on the first vote. But after a test vote and some backroom deals, that scenario appears next to impossible.

Who won’t be coming to the convention?

Plenty of prominent Republican are swearing off the convention. Former Republican presidential nominee Mitt Romney says he can’t support Trump because of the candidate’s “trickle-down racism” and vowed to avoid the convention, as did Rep. Trey Gowdy (R-S.C.), chairman of the House Select Committee on Benghazi. Neither Bush Sr. or Bush Jr. are expected to attend, but former Clinton opponent Bob Dole will make an appearance.

When does the RNC start?

The RNC kicks off on Monday, July 18 in the afternoon and concludes on Thursday night with closing remarks from Donald Trump. Each day will focus on a theme (e.g., national security, the economy) and feature a list of prime-time speakers.

Focus on: jobs, the economy

How do I watch the RNC?

Virtually all the cable news networks will cover the convention’s prime-time speeches, but only CNN and Fox News will be offering 24/7 RNC coverage.

CNN will report round-the-clock, live from Cleveland, as well as through the CNN Politics mobile app, Facebook Live, and other platforms.

If you have Google Cardboard or VR glasses, you can also see what it’s like to be on the convention floor through CNNVR.

You can also watch the primetime speeches on NBC, MSNBC, C-SPAN.

The Late Show with Stephen Colbert will air two weeks of live shows focusing on the national conventions; starting with the RNC convention this week. Former Daily Show host Jon Stewart will reunite with Colbert on the episode that airs on Monday, July 18. You can watch The Late Show on CBS, it airs at 11:30pm ET.

The RNC will stream the entire convention on YouTube.

You can also follow the RNC on Snapchat at gopcovention16.

Snapchat stars such as Mark Kaye, Ali Spagnola, Wysamx, and Audrey Spencer will also covering the convention along with reporters from the Cleveland Plains Dealer.

Follow me on @snapchat newtgingrich94 for #SuperTuesday snaps.Making surprise appearance at one candidate's rally! pic.twitter.com/HC9SGGVugD

The Daily Dot will also be covering the RNC on Facebook Live, beginning at 10:30am ET on July 18. To stay abreast of the updates, be sure to like us on Facebook.

Editor’s note: This story has been updated to provide additional information.