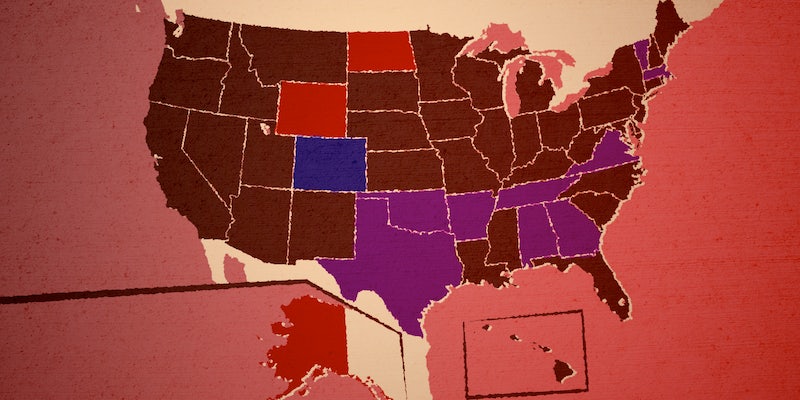 What is Super Tuesday, and why is it important?

The biggest sweep of consecutive primaries happens on Tuesday.

From Massachusetts to Wyoming to Texas, more than a dozen states are expected to hold presidential contests on March 1, known as Super Tuesday. And the results are sure to be a game-changer for Election 2016.

Not only will more states hold primaries or caucuses on Tuesday than on any other day this election cycle, the sheer number of delegates at stake could pose a make-or-break scenario for some candidates. Before Wednesday morning, we’ll find out if Sens. Ted Cruz (R-Texas), Marco Rubio (R-Fla.) and Bernie Sanders (I-VT) are viable challengers or distant threats to frontrunners Hillary Clinton (D) and Donald Trump (R).

But it won’t just be a numbers game. Super Tuesday represents a more geographically and demographically diverse swath of states than we’ve seen the 2016 presidential field encounter so far. This is why many consider Super Tuesday to be the first real test of national electability. Much of the South will be holding contests on Tuesday, so will traditional swing states like Colorado and Virginia.

Will Clinton’s success with black voters in South Carolina also hold true with black voters in the rest of the South? Can Sanders can wrack up support in predominantly white Massachusetts and Minnesota? Will Trump’s claim after Nevada that he’s “number one with Hispanics” hold any weight in Colorado, where Hispanics make up more than 20 percent of the population? Given Colorado’s decision to axe its straw poll and unbound its delegates, will the Hispanic vote even matter?

Before we get to the analysis, let’s nail down the basics of Super Tuesday.

What is the history of Super Tuesday?

The use of “Super Tuesday” as presidential primary lingo to describe a day of several primaries dates back to the 1970s. But the first Super Tuesday as we know it today was organized for the 1988 election by a group of southern and border state legislators known as the Southern Legislative Conference. The SLC’s goal was to change the dynamics of the race by using Super Tuesday to draw more attention to the South and promote more Southern candidates.

Whether that aim was successful or not is  arguable. Unlike Iowa or New Hampshire—the first two states to vote in presidential contests—the importance of Super Tuesday in deciding either party’s nominee has varied widely. East Coaster Michael Dukakis emerged as the front runner in the 1988 Super Tuesday, even though he only won eight of the 21 states. Arkansan Bill Clinton went on to be the first Southerner to make the first Super Tuesday sweep in 1992. Hillary Clinton and Barack Obama were still neck-and-neck after Super Tuesday in 2008. Even though Mitt Romney won six out of 10 Super Tuesday states in 2012, he still fell hundreds of delegates below what would have made him a sure bet for the nomination.

The southern Super Tuesday states also belong to the Southeastern Conference of college football teams, hence the nickname “SEC Primary.” The number of states participating in Super Tuesday has usually been roughly a dozen; only seven states held contests in 2004’s “mini-Tuesday,” and a jaw-dropping 24 states were on board for 2008’s “Super Duper Tuesday.” (States moved their primaries to Super Tuesday in order to increase their influence.) Critics of Super Tuesday argued that it worsened the problem of “front-loading,” where a crowded primary calendar early in the season results in the majority of delegates being snatched up long before primary season is officially over.

Both parties agreed to rule changes in advance of the 2016 elections, such as starting the primary season later than usual, in order to tackle the issue of front-loading. After Super Tuesday, there are still large primaries ahead, including Florida, Illinois, North Carolina, and Missouri on March 15, as well as New York on April 19.

Still, primary season may end early either way. Many expect we’ll know the clear winner from both parties by March 15.

Which states will be holding contests on Super Tuesday 2016?

A total of 13 states will hold contests, including the territory of American Samoa and Democrats who are abroad.

Colorado will hold a Democratic caucus. The Alaska Republican Party will hold a presidential preference poll.

Wyoming and Colorado will begin their caucuses on Super Tuesday, but they won’t allocate delegates. Wyoming will choose most of its delegates in county conventions on March 12. Reacting to state wins by Romney in 2008 and Rick Santorum in 2012 that went nowhere, Colorado decided to opt out of a presidential preference poll and unbound its delegates. Colorado Republicans will instead hold a series of informal straw polls and a precinct caucus to begin the election process for delegates.

How many delegates are up for grabs on Super Tuesday?

Democrats will get an additional 150 superdelegates from the Super Tuesday states that are unpledged, meaning that they are free to vote as they wish.

Clinton seems committed to not letting history repeat itself. She’s wracked up more than 400 superdelegates already. Meanwhile, Sander’s push as an Independent to recruit superdelegates, who are mostly members of the Democrat establishment, has not been successful.

What is the delegate count so far? How many does a candidate need to security the nomination?

According to the Congressional Research Service, the Democratic candidate needs 2,382 delegates and the Republican candidate needs 1,236 to secure their party’s nomination.

Here is the delegate count prior to Super Tuesday, according to Real Clear Politics:

Hillary Clinton: 543 (of which 453 are superdelegates)

Bernie Sanders: 85 (of which 20 are superdelegates)

Super Tuesday 2016 will be different than most other Super Tuesdays for one big reason: proportional allocation. While Super Tuesday may be the biggest primary day of the year, it won’t necessarily yield the biggest win as far as delegates. Due to RNC rule changes in 2012, states that hold their Republican primary before March 15 have to award candidates on a proportional basis. Meaning, candidate with the most votes in a state won’t win all the state’s delegates. Instead, states will allocate delegates to candidates based on the proportion of how many votes they earned.

States have different qualifying thresholds for how many votes a candidate needs to earn before they are awarded delegates. Alabama, Georgia, Texas, and Tennessee are at 20 percent; Arkansas and Oklahoma are at 15 percent.

Many states like Arkansas are divvying up two different groups of delegates, allocating one group based on votes by congressional district and another based on votes state-wide.

The Democrats have had a system of proportional allocation in place for longer than Republicans; the 2016 rules require all states to proportionally allocate delegates with a minimum threshold of 15 percent.

What do the polls say about Super Tuesday?

Polls on Monday indicate that Trump and Clinton are in the lead for most of the Super Tuesday states. According to Real Clear Politics polling averages, Cruz has roughly a 10 point lead over Trump in his home state of Texas. The Lone Star State has the biggest slate of delegates up for grabs on Super Tuesday; a total of 155 Republican delegates and 252 Democratic delegates. Rubio has the lead over Cruz and Trump in Minnesota, but only by a few points.

Clinton is expected to emerge victorious over Sanders on Super Tuesday, topping the Vermont senator by about a 2-to-1 margin in Texas, Georgia, and Tennessee, according to an NBC News/Wall Street Journal/Marist poll.

When will we get results from Super Tuesday?

Polls will close in most states by 7 p.m. ET, meaning that reporting of preliminary results should start shortly after that time.