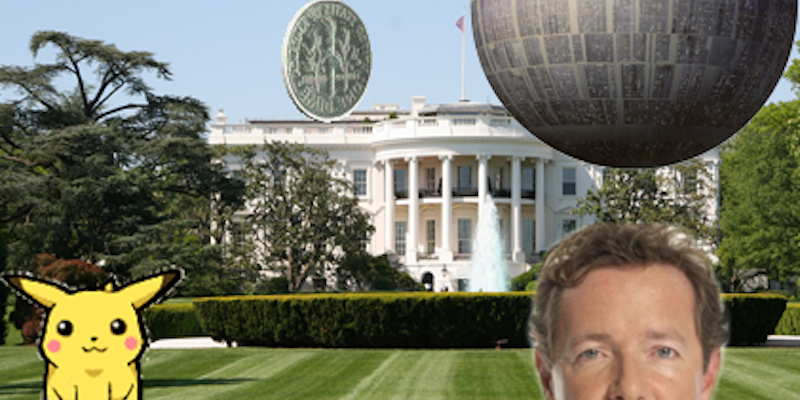 The 10 most bizarre White House petitions

From a Death Star to the deportation of Piers Morgan, the people have spoken—and they’re crazy!

In 1791, the United States of America, in the text of the First Amendment, promised its citizens that Congress shall never have the authority to prohibit or abridge their right “to petition the Government for a redress of grievances.”

In 2012, one concerned citizen exercised that right by requesting the United States government build a Death Star, the Empire’s focal point in the original Star Wars trilogy. The petition gained the 25,000 signatures necessary to force a response from the White House, an act that fully lived up to its comedic potential. (“The Administration does not support blowing up planets,” reads one part of the response.)

But that’s just one of countless documents making a public mockery of We the People, the White House’s official petition site, started in 2011 to use the Internet to foster participation and transparency in the Obama administration. Hundreds of petitions have been submitted to the site, with over 250 currently remaining open.

Most of them are serious in nature, demanding that the government take constitutional stances on issues such as gun control, Internet rights, distributed denial-of-service (DDoS) attacks, the latter created by hacktivist collective Anonymous.

But regrettably, it’s the more absurd protests that have garnered the public’s attention and support. Here are a few of the most bizarre requests made thus far.

And appreciate them while you can, because the White House is no longer amused.

1) Actually take these petitions seriously instead of just using them as an excuse to pretend you are listening
Signatures: 37,167

As the White House’s project grew in popularity, many petitioners felt that their voices were simply not being heard—whether the threshold of 25,000 signatures was met or not. In what could be possibly be the site’s most meta moment so far, there was a petition for petitions to be taken more seriously.

“You are not above us. You ARE us. Govern accordingly,” the petition concluded.

Response: In an essay titled “We’re Listening. Seriously,” the White House explored the process behind the site’s operation, making sure to clarify any gray areas.

“We may not agree with the policy views expressed in every petition (for example, we believe we do take these petitions seriously!), and gathering enough signatures to meet the signature threshold does not guarantee that the Administration will change our policy on a specific topic,” read a part of the response.

In response to Morgan’s “hostile attack against the U.S. Constitution by targeting the Second Amendment,” angry citizens called for the deportation of the British journalist. A counter petition was created in response to this petition by users of social news site Reddit, entitled “Keep Piers Morgan in the USA.,” which stated that the U.K. didn’t want him back.

Response: The White House refused to send Morgan packing, citing the protection of free speech, which is also guaranteed in the First Amendment.

3) Assign NASA to do a feasibility study and conceptual design of the Gen1 USS Enterprise interplanetary spaceship
Signatures: 6,292

Not long after 4chan’s Death Star petition was released, the website BuildTheEnterprise.org petitioned to make part of Star Trek a reality. The creator explained the various benefits that construction of the first USS Enterprise would provide, such as serving as “a spaceship, space station, and space port all in one.” How economical!

4) Release the recipe for the Honey Ale home brewed at the White House
Signatures: 12,240

When major media outlets reported Obama’s enjoyment of a home-brewed beer named “Honey Ale,” it piqued the curiosity of Americans, resulting in Freedom of Information Act requests for the recipe for the beer. Despite not reaching the critical mass necessary to force a response, the Obama administration released the recipe in September 2012 to appease the all-important homebrewer voting bloc in an election year.

5) Mandate states to have state pokemon
Signatures: N/A
The 50 United States have state flags, birds, and flowers. Why not official State Pokemon?

The document that could have paved the way to see Pikachu represent the State of New York reached close to 1,000 signatures in one day. Unfortunately, it was soon removed by site moderators, citing an undisclosed terms-of-service violation.

The petition that could have solved the United States’ money troubles “in two quick and simple steps” came just days after the country avoided plunging off the so-called fiscal cliff at the end of 2012. The petition acknowledges its absurdity, but backs it up with the fact that a platinum trillion-dollar coin is “no more absurd than playing political football with the US — and global — economy at stake.”

This single-word petition was also created just after the country’s near drop off of the fiscal cliff. The petition claims that the administration has failed to understand the real causes of the country’s major problems, such as gun control and global warming. “By any reasonable definition of the American people, this administration is a failure,” it concludes.

An example of protest by parody, this mock petition was drafted as a response to a proposed ban on assault weapons by Senators Dianne Feinstein and Joe Lieberman. It aimed to highlight the dangers of baseball bats and hammers, stating that the two items caused more deaths in the U.S. than guns.

Vice President Joe Biden’s series of poorly worded quips and accidental utterances would make for quality reality TV. This petition wants to see a “recurring C-SPAN television program featuring the daily activities and interactions of the Vice President with elected officials, foreign dignitaries and everyday American families.” It claims that not only will viewers see “a glimpse of the lighthearted side of politics even in the midst of contentious and divisive national debates,” but it will also be educated on the duties and responsibilities of the vice president.

Why should being named to the position of Treasury Secretary come at the cost of one’s unique signature? This petition shows that a loop-filled John Hancock and high-ranking government positions can indeed go hand-in-hand. It demands to see newly appointed Treasury Secretary Jack Lew’s “doodle on every dollar in circulation.”