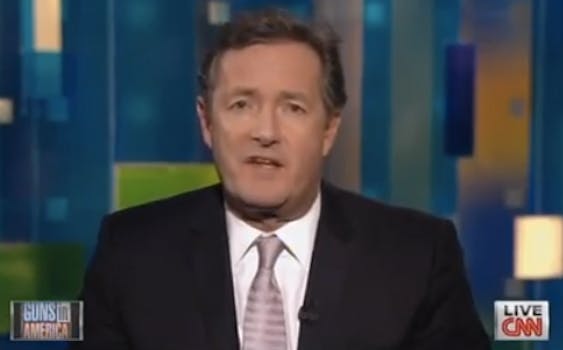 Morgan drew the ire of conservatives with his comments about gun rights, but the White House denied a petition to deport the TV host.

There is good news for fans of British television hosts who like to get into arguments with gun-rights activists: Piers Morgan will not be deported from the United States. That’s the decision made by the White House this week in response to a We The People petition asking that the CNN host be deported after calling for stronger gun laws in America.

More than 109,000 people had signed the petition created on Dec. 21, well above the 25,000 signature threshold that requires an official response. On Wednesday, White House Press Secretary Jay Carney wrote a response titled, “When Discussing the Second Amendment, Keep the First in Mine Too.”

“The Constitution not only guarantees an individual right to bear arms, but also enshrines the freedom of speech and the freedom of the press — fundamental principles that are essential to our democracy. Americans may disagree on matters of public policy and express those disagreements vigorously, but no one should be punished by the government simply because he or she expressed a view on the Second Amendment — or any other matter of public concern,” Carney wrote.

The post went on to say that the tragic events in Newtown, Conn. last month – when a crazed man walked into a school and shot and killed 26 people, including 20 children – has sparked a passionate debate about gun control, but that both sides should be respectful of one another. One of the most vocal critics of America’s lax gun regulations has been Morgan, who has used his nightly CNN show as a bullhorn for his thoughts on the issue.

A White House response came a day after Morgan invited conservative radio show host Alex Jones, one of the primary forces behind the petition, to his CNN show for an interview. Not surprisingly, it ended with a lot of yelling.

The tragedy in Connecticut on Dec. 14 resulted in an uptick in petitions on the White House’s We The People petition site. Some called for more gun control, others for protections of the second amendment, and some for more pointless objectives. Like deporting television hosts.