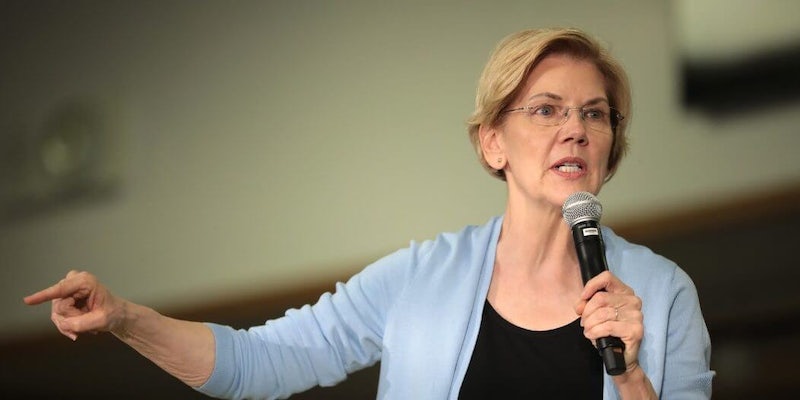 They refuse to cross the union picket line.

Sodexo employees—who work at the university and are represented by Unite Here Local 11, a union that represents 31,000 hospitality workers in Southern California and Arizona—are reportedly fighting for wage and benefit increases.

Warren was to first tweet that she might skip the debate due to the dispute between Unite Here Local 11 and Sodexo.

“The DNC should find a solution that lives up to our party’s commitment to fight for working people. I will not cross the union’s picket line even if it means missing the debate,” Warren wrote.

.@UniteHere11 is fighting for better wages and benefits—and I stand with them. The DNC should find a solution that lives up to our party's commitment to fight for working people. I will not cross the union's picket line even if it means missing the debate.

Roughly a half-hour later, Sanders echoed Warren’s sentiments, saying, “I stand with the workers … fighting Sodexo for a better contract.”

I stand with the workers of @UniteHere11 on campus at Loyola Marymount University fighting Sodexo for a better contract. I will not be crossing their picket line.

Twenty minutes later, Yang signed on to skip the debate due to the dispute.

“I won’t cross the @UniteHere11 picket line,” he wrote.

Some reacting to the announcements accused the candidates of pandering, being disingenuous or flip-flopping. But most seemed pleased by their support for the union workers.

Sodexo is an enormous company with thousands of lucrative contracts. They can afford to pay a good wage AND benefits. Giant corporations MUST be reigned in!

In recent years, the Democratic party has had some difficulties appealing to working Americans, though their union support is historically strong. Many Democratic candidates courting this important voting block have tried to improve the party’s focus on labor rights.