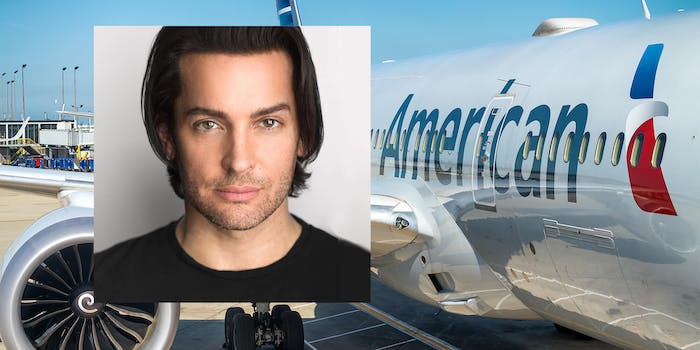 Brandon Straka is familiar with leaving things behind. As the founder of the Walkaway movement, he has led the (some would say bot-aided) charge to break up with the Democratic party.

Straka, who is gay, went viral last year with his claim that he was “walking away” from the Democrats, who he believed secretly were worse on gay rights than Republicans.

He is now an ardent and enthusiastic supporter of President Donald Trump.

But his enthusiasm for walking away from things apparently doesn’t extend to flights he’s not welcome on.

Straka had to be forced off of a plane on Wednesday after he refused to don a mask, per the airline’s recommended guidelines.

And the whole exchange was caught by a New York Times reporter who was on the same flight.

“[T]here is currently a mutiny on my flight to tulsa (via dallas) because a guy is refusing to wear a mask and the flight can’t take off,” wrote the Times‘ Astead Herndon, adding later “he just got off the plane and ppl applauded lmaooo.”

That would have been the end of a minor blip online until Straka identified himself (not knowing his experience had been live-tweeted already).

“I was just removed from my flight for not wearing a mask. 1st time this has happened. Not a federal law. @AmericanAir staff standing over me telling me it’s THE LAW. So much for ‘please respect those who can not wear a mask’. When I pointed out this wasn’t a law I was removed,” he tweeted.

He later claimed that he told the flight attendant that “sanity” prevented him from wearing a mask, which Herndon said is not how the interaction went down.

Herndon said Straka was asked to provide paperwork for any condition he might have, and he refused.

(Straka later said it was a joke after he was called out.)

Because in the middle of the worst pandemic the nation has seen in over 100 years, the simple act of wearing a mask has become part of this nation’s enduring divisions. Defiant Trump supporters believe being asked to wear a mask by private businesses when they enter or partake in their services is an infringement on their inherent freedoms, echoing Trump himself, who refuses to don masks in public.

The Centers for Disease Control says you should wear a mask.