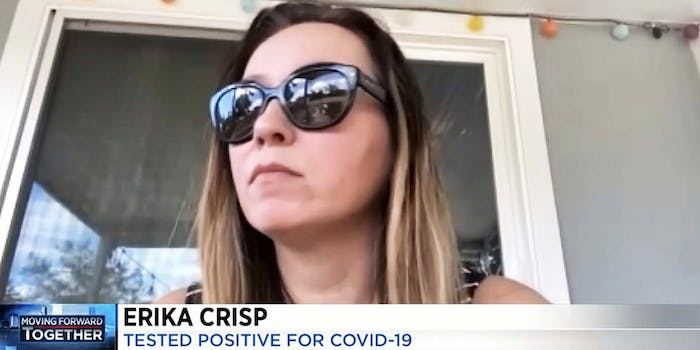 After first night out on the town, woman and 15 friends test positive for coronavirus

'The state opens back up and said everybody was fine, so we took advantage of that.'

Six states—Arizona, Florida, Nevada, Oklahoma, Oregon, and Texas—are now reporting record high cases of coronavirus after reopening up economies. And to illustrate just how contagious this disease is, one Jacksonville Beach bar has been attributed as the source of at least two dozen cases, including one woman and 15 of her friends who were enjoying their first night back out since the pandemic broke.

Crisp and 15 of her friends had been out at Lynch’s Irish Pub in Jacksonville Beach on June 6, and all 15 have since tested positive for the coronavirus.

“This is a lesson for everyone,” Crisp later told News4Jax. “We’ve all been stuck indoors for months, being careful, social distancing, doing everything the right way. And then the first night we go out, Murphy’s Law, I guess.”

“I think we were careless and we went out into a public place when we should not have,” she added. “And we were not wearing masks. I think we had a whole ‘Out of sight, out of mind’ mentality. The state opens back up and said everybody was fine, so we took advantage of that.”

Unfortunately, though Crisp and her friends may have been careful for months, it only takes coming into contact with the virus one time to get infected. Not to mention, she and her friends broke two of the cardinal rules of responsible social distancing—sticking to small groups and staying outdoors.

The bar has since shut down to be sanitized and reopened, and seven out of 49 employees also tested positive for the virus. Before reopening on Tuesday, Lynch’s general manager Keith Doherty said he planned to have hand sanitizer stations throughout the bar and would require staff to wear masks at all times. They also plan to check customer temperatures as they enter the bar.

After she initially shared her diagnosis on Facebook, others who had been at Lynch’s that night also reached out to Crisp.

“Since my initial posts, groups of people have been diagnosed this week with COVID who went to Lynch’s last weekend,” she wrote. “So far I have personally been messaged by over 20 people I don’t even know who have now been tested positive that were there. It’s the common denominator from a bunch of strangers.”

Crisp added that her group had not been bar hopping, and had stayed at Lynch’s the entire time.

Other nearby bars in Jacksonville Beach have also temporarily closed, but as they begin to once again reopen it will remain to be seen whether this type of incident can be avoided going forward, even with upgraded protective measures.

On March 3, a choir practice in Washington state was the catalyst for one of the earliest widespread outbreaks—a so-called “superspreader” event in which 52 out of 78 choir members were infected by one asymptomatic carrier. Of the 52 who contracted the virus, three were hospitalized and two later died.