Voycee: The social network that replaces your last post with each new one

Just think of it as the anti-Timeline.

Have you ever looked at your Facebook Timeline? Have you ever gone way, way back, like to the month you joined the network, tickled pink at the prospect of sharing your real, authentic self with all your friends? From that first flood of photos and inside jokes and brilliant insights, there’s likely at least one post that would horrify you now. A rant about how you’d like to see your boss drawn and quartered; a red-faced photo you can’t remember taking; a passive-aggressive post directed at a friend with whom you’ve long since buried the hatchet. There will be something that embarrasses you, that has you frantically hitting “delete.”

And it might make you wish there were a social network less interested in your past and more in your present (especially when some of them bait you with your embarrassing past). That’s where Voycee comes in. The iOS app, which officially launched last month, looks a lot like Facebook’s mobile feed, with one catch: There’s no archive, no digital footprint. Every time you upload a new photo, video, status update or audio clip, the previous one disappears, along with any likes, comments, or notifications it received. Voycee’s tagline is appropriately: “The history-free social network.”

A drunken upload can’t do quite so much damage if, after a couple of days, or even hours, it’s like it never existed. 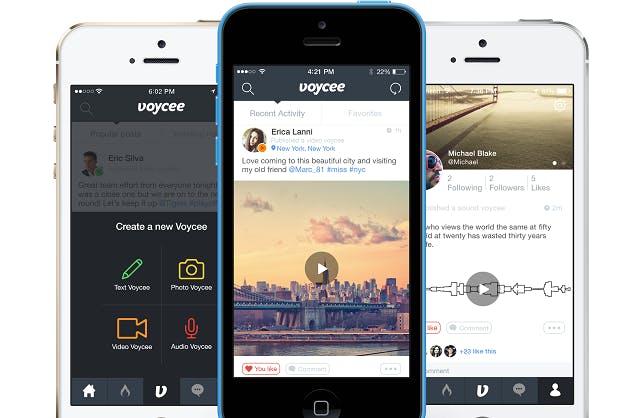 Voycee’s creator, Ilfan Radoncic, owns a Manhattan-based digital agency that has developed products for Fortune 500 companies. In the process, he’s seen firsthand how digital companies collect and profit off of data provided freely—and sometimes unknowingly—by users. “I’ve seen how easy it is to mine people’s data, and I’m not OK with that,” Radoncic told the Daily Dot. “We wanted to come up with a social network that allows people to stay connected, while respecting individual privacy.”

In the wake of Edward Snowden‘s NSA revelations and more recently, the European Court of Justice’s ratification of the “right to be forgotten”—requiring search engines like Google to delete certain search results if they infringe on a user’s privacy—Internet users are once again confronting the permanence of information shared online. Social media posts stick around for years, quietly floating around servers, occasionally resurfacing and inflicting damage.

But there’s more at stake than what comes up in a Google search. Huge companies like Google, Facebook, and Twitter are using your “cyber footprint“—your search history, the content of your tweets and status updates, the geotag behind your latest post on Instagram—to create targeted advertisements or conduct research on your demographic, making billions of dollars in the process. And other companies, ones you’ve never even heard of, are buying data from third-party apps and selling your likes and dislikes to advertisers, often coupled with information from the public record, like your address, birthday, and credit history.

There’s not a whole lot you can do about it, short of going off the grid entirely; in April of last year, a California assemblymember proposed a bill that would let California residents see what information data brokers had collected about them, but the bill unsurprisingly stalled last month under pressure from the tech lobby.

The idea behind Voycee, according to Radoncic, was to take “the best part of social media”—the constant sharing and communication—and eliminate the fear that those communications were being manipulated, brokered, or sold, sight unseen. Radoncic built the app with a team of developers from his agency, receiving no outside funding, and so far generating no profit from the app. He said the service currently has a couple thousand users in the United States and abroad.

Ephemeral messaging services like Snapchat and its many clones, not to mention apps like Secret and Whisper that allow users to post with total anonymity, seem to have taken off for precisely the same reasons the team built Voycee. Sometimes, you don’t want your innermost thoughts sticking around. Living in the present is relatively guilt-free; problems arise when those rants and party pics become permanent.

Of course, Snapchat’s ephemerality turned out to be mostly an illusion; those posts remained in the app’s servers, despite the company’s claims to the contrary. In contrast, Radoncic said, once you create a new post on Voycee the old one is effectively erased from its servers. It’s a money-saving tactic as much as it is a privacy-conscious one. “We can keep our data servers as small as possible, because we’re erasing all the past data,” he said. 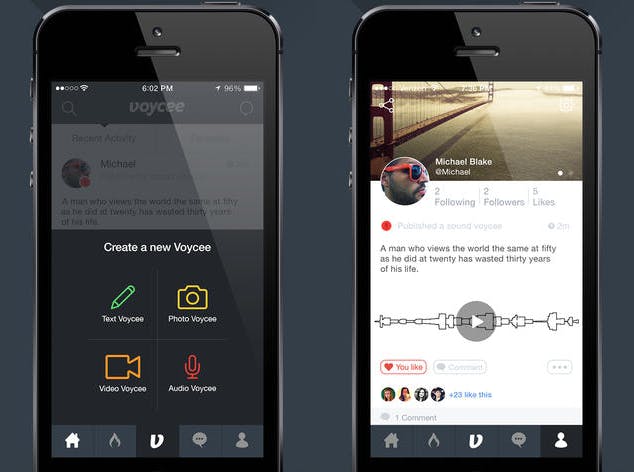 As a result, Radoncic has no immediate plans to monetize the app, so long as he can keep fielding the server costs. And he certainly wouldn’t consider running ads on the platform. “Users hate ads,” he said. “Looking at other social networks, you’re following your friends, you’re following certain users, then all of a sudden you get hit with a Taco Bell commercial. I don’t think that’s the right way to go, forcing people to watch something that they didn’t choose to watch.”

The app’s primary motivation may be political, but it also has a practical appeal: Your feed won’t be cluttered with posts from that one friend who shares bland updates 10 times a day. On the flip side, you might find yourself compelled to use the network more often, so as not to miss content from the frequent users whose content you actually do want to see. Radoncic added that the one-post restriction may force users to up the quality of their posts, rather than “spamming” the app with a photo dump.

Facebook’s main appeal, in contrast to ephemeral apps like Snapchat and now Voycee, is that it functions as a sort of diary, an archive of moments and memories and accomplishments that you can revisit at any time. There’s certainly something sweet about being able to look back on the moment your relationship started, or the first message your best friend ever wrote to you. But as Radoncic pointed out, the dark side of networks like Facebook and Twitter is that they can just as easily become career-killers. Nearly half of all employers, and nearly one in three colleges, have scrutinized an applicant’s social media accounts. An off-color joke, an excessive number of keg stands—these things can now damage your future.

“We’re not here to shut down Facebook or any other network,” Radoncic added. “But in the long run, if we can get users to adjust how they think about privacy, if people actually care about how their data is being handled, we’ll have accomplished our goal.”