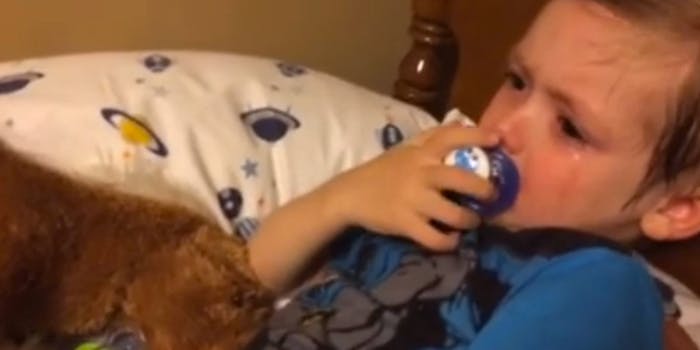 "I wanted to run for president."

As of this Tuesday, there are 573 days until the 2016 presidential election. That is an extremely long time for the candidates to subject themselves to the relentless, abject humiliation of the campaign trail with its endless grind of petty personal attacks, constantly begging rich people for money, and the deep, existential despair of spending time in Iowa.

Why would anyone willingly run for president knowing full well what it entails in today’s vast, terrible political wasteland? To make the world the better place and serve your country or whatever? Maybe that sort of sincerity is driving some of it, but the real reason is likely something far more primal, something embedded deep in the human psyche from birth.

From the mouth of babes often comes the gospel truth, which is why a video posted on Facebook by Erin Celello showing a young boy named Zeke’s reaction to Hillary Clinton’s much-discussed campaign announcement video provides some profound insight into what makes someone want to run for president.

Clinton’s video sent Zeke into hysterics. Like so many others, Zeke was upset that Clinton was running for president and that meant that he might not be able to. “I wanted to run for president,” he said, choking back tears.

When asked what he would do if he were elected president, Zeke responded, “Play with toys.”

Taking the pacifier out of his mouth, Zeke declared, “I’m Zeke, and I’m running for president,” with an authority worthy of the Oval Office.