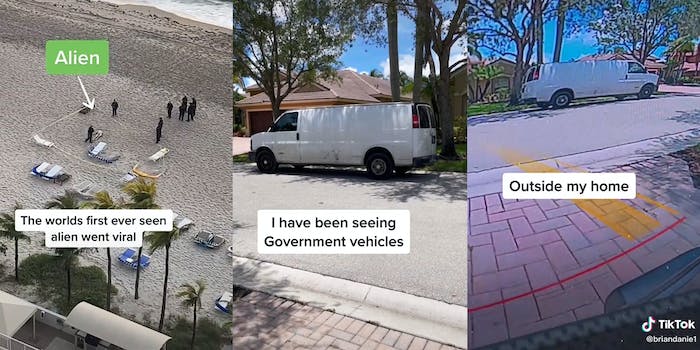 It's not clear if he's sincere or if it's all bit.

A viral TikTok supposedly shows the government conducting surveillance on a man who says he has proof that aliens live among us.

The TikToker, Brian Daniel, whose handle is @briandaniel1, has posted footage he claims is of a space object landing in Florida and an alien, presumably dead, lying on a beach in a taped-off area surrounded by authorities. He also claims that government vehicles started showing up outside his home after his TikToks went viral.

While many seem to believe his claims, there are indications that the entire thing is a bit. The Daily Dot was not able to reach Daniel for comment.

“A couple weeks ago, I even saw a man investigating my property,” an electronically altered male British voice says in one of Daniel’s recent TikToks. That one shows a man in business attire holding a cell phone and appearing to take a photo or video of a residence.

“Did he show up to delete the only true evidence that aliens might actually be living among us?”

Daniel urges people to save and share the video “in case the government permanently takes it away.”

His followers have complied. As of this writing, the video has 26 million views and more than 3 million likes.

Before he started posting videos of “aliens,” Daniel’s TikToks mostly featured party scenes and things he found amusing, like when he dropped a lit cigar on his chest and cried out in pain. Most of these videos include #viral in the hashtags.

With the alien videos, he finally hit virality big time. His first TikTok about aliens from April alleged to contain footage of a space object landing in Florida. It has 8 million views. He followed it up with several more TikToks about aliens.

Many contain the same footage and allege that the government is watching him. Nearly all have at least 1 million views; several have roughly 20 million views or more.

While Daniel has achieved virality, and many people seem to believe his footage is authentic, others aren’t so sure.

His recent TikTok about government surveillance has prompted numerous comments that it’s “sus” or suspect.

“Among us is so sus,” reads one of the top comments.

“NEW LESSON LEARNED: Never say among us in a serious vid,” reads another.

Other comments imply that it’s all a gimmick. “Even tho I think we’re witnessing the biggest hoax again, I still enjoy this series,” someone commented on his most recent TikTok. In that particular TikTok, Daniel claims that his alien videos’ popularity—100 million have watched them, he says—has inspired celebrities to contact him with their own close encounters with extraterrestrial life.

“This series is soooo good,” added another person.

But while some laugh, and it’s not clear whether Daniel is sincere, many remain convinced that his footage and claims are legitimate.

“Be careful of the celebrities! For real! Trust no one!” reads one of the reactions to his TikTok about celebrities sharing their alien encounters with him. Another vowed to save and share, and yet another said they were brainstorming which celebs it might be.

Only Daniel knows for sure.