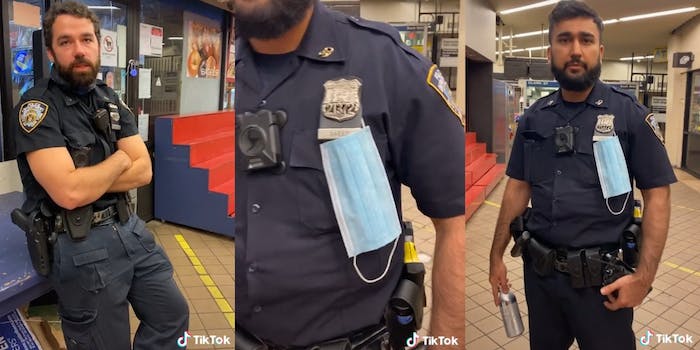 The student confronts the cops in a viral video.

A video on TikTok has gone viral after a police officer in New York City called a college student “the male version of a Karen.”

The incident began when the student, Mihai Ciocan, confronted two officers in a subway station who weren’t wearing face masks.

The city announced just one day prior that it would begin issuing $50 fines to anyone not covering their faces while using public transit, leading Ciocan to ask whether the officers were exempt.

“Does the fine apply to just me or you guys if you don’t wear a mask?” Ciocan asked.

The first officer stated that masks weren’t necessary, so long as an individual wasn’t within 6 feet of anyone else.

When Ciocan pointed out that the two officers were standing less than 6 feet away from one another, the second cop accused the student of acting like a Karen.

A Karen is a slang term that usually refers to outraged and nosy white women who make a scene in public.

“All right, Karen,” the officer said. “You’re like the male version of Karen.”

When Ciocan finally decided to leave, the officer used the term again.

Ciocan argued to NBC New York that the officer’s use of the insult was inappropriate.

“I just feel like equating [‘Karen’] to just asking why they weren’t wearing a mask wasn’t really appropriate,” Ciocan said.

The New York Police Department (NYPD) responded to the incident by simply stating that it’s important for officers to wear their masks.

Despite the officer’s claims of not needing a mask when properly social distancing, the city’s transit authority told PIX 11 that no one is exempt from the mandate.

“Everyone in the transit system is required to wear a mask ― it’s the law ― no exceptions,” said Sarah Feinberg, the interim president of NYC Transit. “This is a matter of respect for fellow New Yorkers, including our customers and employees, and for public health and safety.”