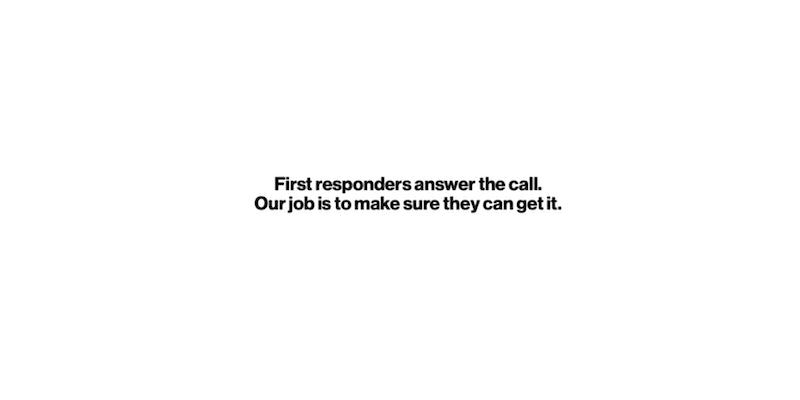 While the ad was emotional, people didn't forget the throttling of firefighters.

Verizon ran an emotional ad during the Super Bowl last night where it said it would donate money to first responders if people retweeted posts with a specific hashtag thanking them.

The ad comes after Verizon was criticized for throttling the data speeds of firefighters last year during California’s devastating wildfires—a subject that was part of the lead up to a major net neutrality legal battle that was argued late last week.

The ad featured the head coach of the Los Angeles Chargers thanking first responders for coming to a car accident he had in 2005. The ad also announced a discount for first responders and a “dedicated lane” for them to help during “times of network congestion.”

“First responders of California answer the call,” the ad reads just before it finishes. “Our job is to make sure they can get it.”

As Ars Technica noted at the time, the Santa Clara County fire chief said Verizon’s throttling of its data had a “significant impact” on their ability to help people amid the wildfires.

Verizon told the news outlet it “made a mistake” and should have lifted data speed restrictions amid the fires as it is “practice to remove data restrictions … in emergency situations.”

“If one citizen receives the evacuation order later than his or her neighbor, this delay can result in a loss of lives,” Tony Bowden the fire chief, told reporters last week. “It is just as critical for the citizens we protect to be able to receive these critical communications as it is for us as first responders to be able to send the information to the citizens we serve.”

Some people responding to Verizon’s ad during last night’s Super Bowl did not forget about the throttling.

This isn’t the first time Verizon has used first responders in an ad following the data throttling. In October of last year, the company released an ad called “Enabling Heroes” where it touted its support of first responders.