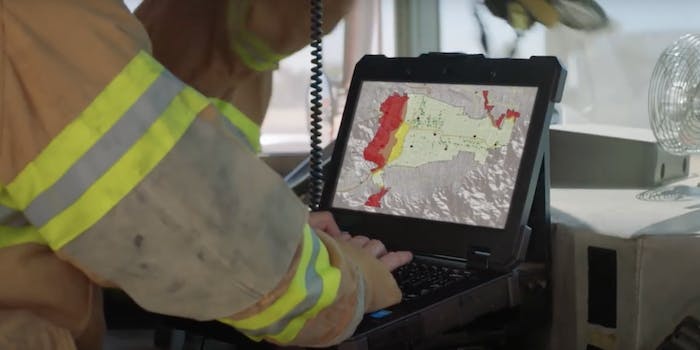 The new commercial debuted on YouTube with terrible timing.

In a new commercial, Verizon is touting its support of and commitment to our country’s emergency responders, but the Verizon ad spot directly contradicts the experience of California’s first responders during its wildfire season last year.

Reactions to the video have been icy—according to Ars Technica, the company closed comments on the YouTube video after an overwhelmingly negative response. (According to a Reddit thread, at 60,000 views, the video had 72 likes and 20,000 dislikes. The Verizon ad now has more than 110,000 views.) Some of the negative feedback has spilled over to Twitter.

What a bullshit tv ad from @verizon. “We care about first responders”. Yet these are the same people that cut off service to CA firefighters in the middle of fighting a massive blaze because they went over their data caps. #VerizonSucks

It may have had a warmer reception if the ad had run a few months earlier: In August, it came to light that the company throttled first responders’ data as they fought fires in California this year. The Santa Clara County fire department joined a number of other government agencies in suing the federal government over its net neutrality laws, which allowed this type of behavior.

Verizon has a history of throttling users, both as policy and anecdotally as video streaming sites such as Netflix and YouTube have gained popularity among mobile users. However, news that the data provider compromised firefighting efforts by forcing at least one agency to upgrade to a bigger data plan in order to save lives—that was a step beyond what many thought even Verizon was capable of. The company chalked it up to a mistake, a customer service representative failing to follow policy, and has since promised to stop throttling firefighters and offer them unlimited plans with “no caps.” It’s unclear whether Verizon has followed through with that promise at this point or not.