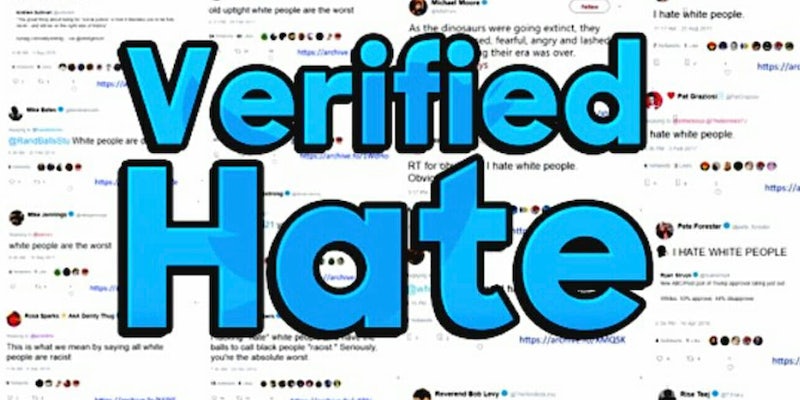 Far-right Twitter wages a war on liberal accounts with #VerifiedHate

They want revenge on far-right activists who lost their verified status.

Twitter users are trying to prove the tech company’s censorship of conservative voices with the trending #VerifiedHate.

The hashtag flags tweets by verified, liberal users who supporters say violate Twitter’s terms of service by using or promoting hate speech. They’re looking for retribution for far-right activists like Jason Kessler and Richard Spencer, among others, who had their accounts unverified last year for promoting hateful content.

This latest chapter in the saga of the digital First Amendment took off on Friday but can be traced back to Aug. 7 when Twitter user @PabloTheWise tweeted “So @twitter is allowing racist hate speech by leftists from verified accounts to continue, while blanket censoring conservatives. Anyone else bothered by this? #VerifiedHate.”

The tweet caught the eye of conservative commentator Ann Coulter, who retweeted the post that made its way to r/TheTwitterFeed 15 days ago.

But the hashtag didn’t really blow up until this week, when Twitter user @meme_amerIca started compiling tweets by verified users that express antipathy toward whites and white supremacy.

A screenshot of the tweet is superimposed on a photo of Drucker, along with information about his career.

@meme_amerIca has repeated this formula for writers from BuzzFeed, CNN and Vice, among others. The compilations make it easy to see that the users tweeting “anti-white sentiment” are themselves white.

While some of the tweets are more violent and reference “white genocide,” many simply express frustration with the stupid, hateful, offensive, and violent things that white people (given that whiteness as the dominant culture) do all the time. And, as white people, the tweeters implicitly include themselves in that group.

Twitter’s policy prohibits hateful conduct against others “on the basis of race, ethnicity, national origin, sexual orientation, gender, gender identity, religious affiliation, age, disability, or serious disease.” Specific examples of such conduct include, “violent threats; wishes for the physical harm, death, or disease of individuals or groups; references to mass murder, violent events, or specific means of violence in which/with which such groups have been the primary targets or victims; behavior that incites fear about a protected group; repeated and/or non-consensual slurs, epithets, racist and sexist tropes, or other content that degrades someone.”

Certainly on their face, some of the tweets, particularly jokes about white genocide, cited under #VerifiedHate would violate the terms of service. But Twitter also includes a section about the context of the speech.

For example, this tweet from BuzzFeed writer Tracy Clayton is written in a caricature of slave vernacular and is a response to a Black comedian.

The context of the tweet is that it’s quite clearly a joke and commentary on how Black people have been portrayed by white culture for decades. But #VerifiedHate doesn’t look at the context of the tweets in question and whether they’re written by comedians of color pushing back against with humor or white members of the media expressing frustration with racism and ignorance. Accounts like @meme_amerIca are branding them as “hateful” and demanding that Twitter take away the accounts’ verification. Twitter did not immediately respond to the Daily Dot’s request for comment.

While some of the tweets are unprofessional, especially for members of the media, they’re not calling for an ethnostate, like Richard Spencer uses Twitter to do. And Spencer and others like him still have use of the platform. They don’t have the little blue check of credibility, but they haven’t been banned (yet).

The #VerifiedHate hashtag even seized upon President Donald Trump’s tweet claiming wide-scale murders of white South African farmers, although there’s no evidence to support the assertion.

The #VerifiedHate hashtag also makes an appearance on 8chan’s Politically Incorrect thread among posts denigrating Jewish and Black people. There, too, critics assert that liberals are getting away with “open racism” on Twitter, throwing context out the window and disregarding the definition of racism itself.