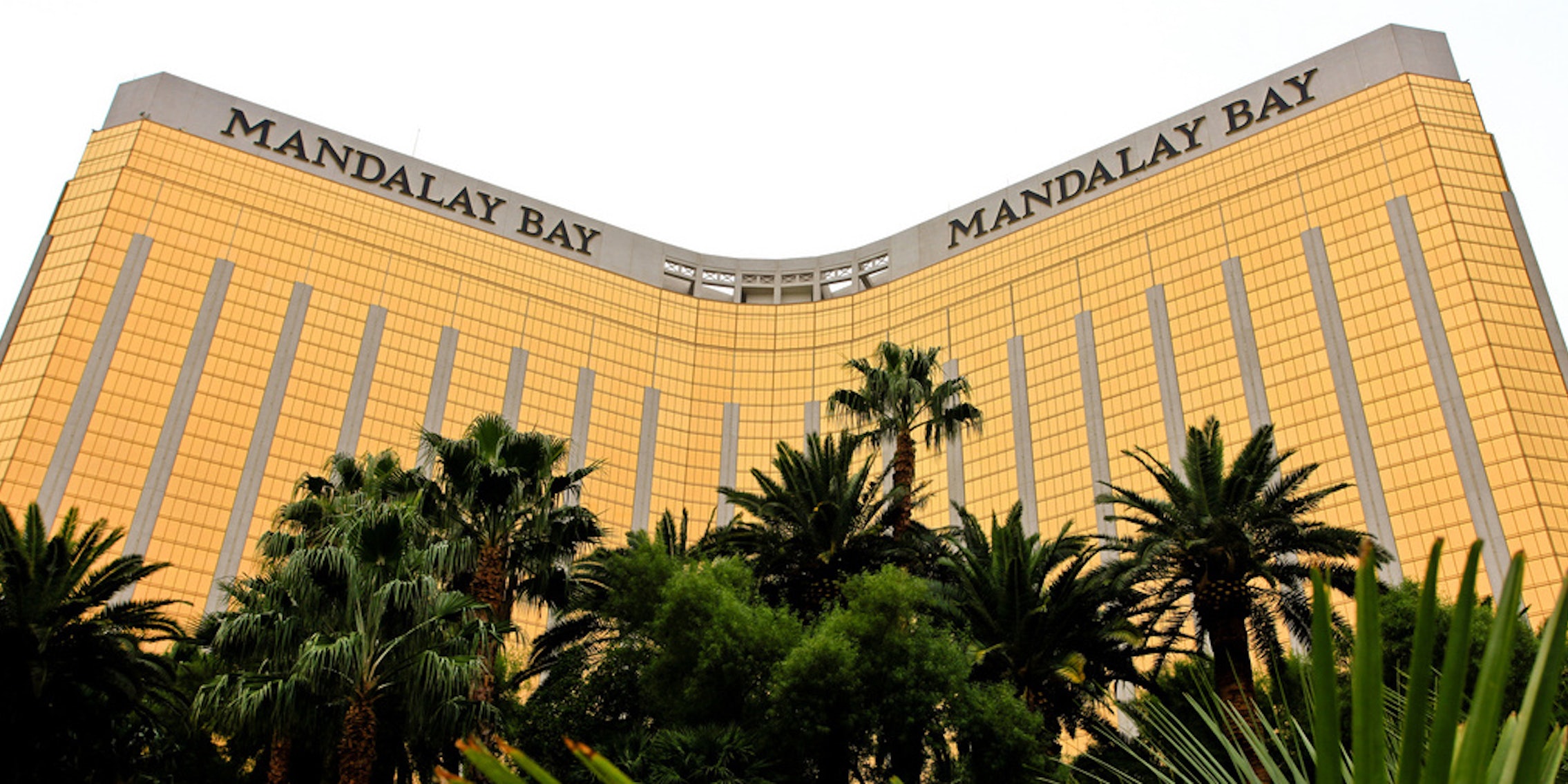 A busy Las Vegas casino sees millions of dollars change hands every day, with a floor full of both patrons and employees looking for any weakness they can take advantage of. So every casino ceiling is studded with cameras, both hidden and obvious, watching everything that takes place.

And on March 22, nearly six months after gunman Stephen Paddock went on a killing spree in Las Vegas, some of the footage taken by the security cameras at Mandalay Bay finally emerged.

The New York Times obtained a substantial amount of security camera footage showing Paddock making the methodical preparations for the carnage he was about to unleash, including loading bags from his car onto bellhop carts.

While most of the conspiracy theories about the shooting were debunked as quickly as they emerged, many people had a legitimate issue with the fact that no footage of Paddock in the casino had been released, even after months had gone by.

Without security camera footage, it was impossible to conclusively prove the Las Vegas Police Department’s conclusion that Paddock acted alone. So it’s only natural that the already persistent conspiracy theories about a second shooter got even more entrenched. As the months went on, protests broke out demanding the footage be released, and the Los Angeles Times filed a lawsuit to get security and body camera footage released.

One conspiracy theorist, self-styled “citizen journalist” Laura Loomer, even started raising money to “crowdsource a bounty for anyone who is able to provide security footage from Mandalay Bay that shows Stephen Paddock carrying bags from his car through the lobby.” She raised less than $1,500 of her $100,000 goal.

Funny how the Las Vegas shooting is never in the news. The deadliest mass shooting in the history of our country simply died away as a story.

Hundreds of unanswered questions with no video footage even though it took place in a casino…..

Anyone else find that suspicious?

Still no footage of Stephen Paddock checking into the Mandalay Bay..

Someone had to say it…

Speculation ran wild among conspiracy theorists on Reddit, as well.

One of the year’s most popular threads on reddit thread r/conspiracy blared “Reminder: it’s been 81 days since the deadliest mass shooting in modern American history, and we still have no motive, the media is silent, and dozens of unanswered questions remain.”

Another hugely popular Reddit thread, posted just a day before the Times story broke, asked “Pictures of Austin Bomber dropping off package bomb already released. Where are the pictures of Stephen Paddock bringing up 17 assault rifles to his hotel room and why is the FBI hiding them?”

But with the Times releasing footage of a man who is clearly Stephen Paddock clearly having over a dozen huge bags brought into the Mandalay Bay, these questions should be answered, right?

To be sure, some skeptics of the “official story” were satisfied by the footage. A thread on r/conspiracy instantly popped up, declaring “Surveillance Videos of Paddock pre-Attack” and linking to the Times story. Even Alex Jones seemed to acknowledge the veracity of the footage, posting an un-bylined story on Infowars that played it straight down the middle.

But just as many people seemed to take the footage as yet one more fakery in a massive cover-up.

Time stamps are easy enough to add in post-production, so just having them there wouldn’t prove anything. Beyond that, many of the pieces of footage released by the Times actually do have visible stamps, particularly shots where Paddock is on the casino floor or walking into the building. That not all of them do owes more to the brand of camera used than a massive conspiracy.

Some people questioned why it was given to the New York Times, when they got it, and how long they sat on it for. Others wondered why one of the highest-grossing casinos in Las Vegas would use grainy CCTV cameras, rather than the latest high definition technology.

But the biggest complaint about the footage isn’t some technical quibble. It’s that it doesn’t prove there wasn’t a cover-up or that Paddock didn’t have an accomplice. It merely shows Paddock bringing guns into the hotel—which was already common knowledge.

In fact, this footage is just ten minutes of what the Los Angeles Times says are 750 hours of security camera and police body camera footage that the Las Vegas PD and the Mandalay Bay are keeping locked away, with no indication of when they’ll be released. No footage has been released of Paddock actually shooting, nor has any emerged from the hallway outside his room, where he shot a security guard before opening fire on the crowd.

Amazing how this was only sent to The NY Times by MGM. Also some isn’t date stamped. The interesting part is if these suitcases had weapons they aren’t going to be tossing them around the way the bellhop was. #LasVegasShooting https://t.co/RqF4atjseM

And so, the conspiracy theories continue.

There are whispers that the reason Paddock had so many guns was that he was involved in some kind of arms deal that went horribly wrong. There are also questions about why Paddock ordered two meals from room service one night before the massacre, which would imply he had an accomplice; or why ISIS took credit for the attack despite no public evidence Paddock had any link to them.

The footage doesn’t dispel any of that, nor can it. Ten minutes of footage isn’t going to knock down every conspiracy theory—particularly when the goalposts keep moving, and the standard for “proof” only gets more and more unreachable.

It’s entirely possible that the Las Vegas PD is delaying releasing the body camera footage because it would call into question their response to the shooting. And the Mandalay Bay might not want more footage released because it would expose their lax security, which allowed Paddock to bring nearly two dozen guns into their casino.

These are entirely pedestrian possibilities that require no conspiracy. But in the absence of an explanation, a conspiracy theory will emerge anyway.