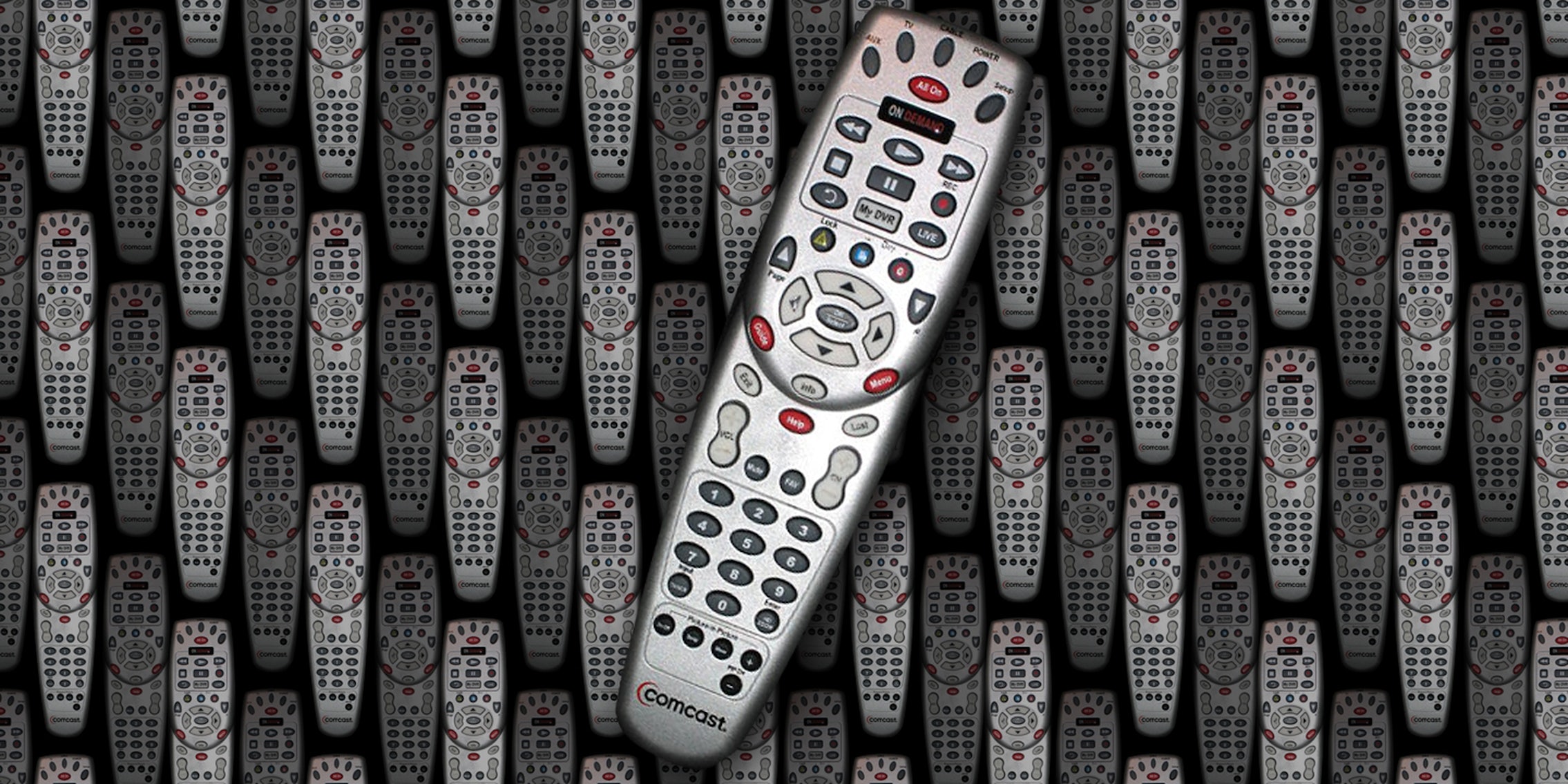 Your cable box may soon be set free.

Net neutrality is upheld in light of Tuesday’s U.S. Appeals court ruling, but a new FCC battle involving your cable box is in the works. Few cable subscribers are thrilled about the $8-10 dollars per month it costs to rent their television’s cable set-top box. But what if Google or Apple had a cheaper option?

That’s the basic idea behind the movement behind cable box reform, promoted under the hashtag #unlockthebox, which trended on Twitter earlier this month. A study commissioned by Congress estimated that the average American spends $231 per year on cable box rental fees. Democratic lawmakers such as Sen. Ed Markey (D-Colo.) and Rep. Anne Eshoo (D-Calif.), both ranking members on the committees that deal with telecom policy, are in favor of an Federal Communications Commission proposal to remove the cable industry’s hold on the cable box.

When we #UnlockTheBox, we unlock competition, we unlock choice & we unlock the power of American innovation. pic.twitter.com/NIWhTy3Y3I

Meanwhile, the cable industry is pushing back hard with their own lobbying force in Congress.

Here’s a rundown on the basics of the #unlockthebox debate:

Why does the FCC want to #unlockthebox?

In the hierarchy of hidden fees, renting your cable box ranks somewhere up there with baggage fees and Ticketmaster’s booking fees. It’s an annoying, unanticipated cost that most consumers begrudgingly accept due to not having an alternative. If the FCC, the White House, and Silicon Valley have their say, that may soon change.

If you subscribe to streaming services like Hulu and Netflix, chances are you own an Apple TV, Roku, Chromecast, Amazon Firestick or any of other streaming media players that lets you watch content on your television. But if you want to switch between Unbreakable Kimmy Schmidt to The Rachel Maddow Show, you may have to unplug a few cables or, at the very least, switch channels and remotes. In short, there’s no way to access your cable content from your streaming media player—you have to connect back to your cable box. A two minute Netflix-to-cable switchout might seem like a trivial daily nuisance to you, but the market forces behind why it’s that wa  are the cause of what is expected to be a long and expensive turf war with the FCC and Silicon Valley on one side, the cable industry on the other, and Congress stuck in the middle.

FCC Chairman Tom Wheeler wants to give tech companies a chance to compete with the cable industry and let consumers pick the cable-delivery device of their choice. The FCC earlier this year voted to take comments on a new proposal that aims to tear down barriers to competition in the current market and allow companies to develop newer and cheaper options to the traditional cable box. Over the past 30 days, more than 176,000 comments have been filed in response.

Under the proposal, consumers would no longer be tied to the boxes offered by their cable company. They could choose to buy a device from a company like Amazon, Apple or Google that would allow them to watch live television as well as streaming services like Hulu and Netflix. Supporters say the end result would be cheaper prices, with cable companies competing with third-party devices.

“In the absence of competition, incumbents have used this monopolistic power to stifle innovation and require their customers to pay an exorbitant monthly fee to rent a device that only evolves as and when they choose,” wrote INCOMPAS in their FCC filing.

President Barack Obama is in support of the FCC #unlockthebox proposal. The New York Times reported in April that White House officials made the rare move of filing public comments on the agency’s plan.

“The cable or satellite box is just one example of an area where, because it’s been tied to the provider and you rent it, and consumers spend billions of dollars on it every single year, there hasn’t been much innovation,” Obama said in an April interview with Yahoo Finance.

White House economic advisors Jason Furman and Jeffrey Zients, in a White House blog post, likened the cable industry’s hold on cable boxes to when Americans were forced to rent the same, expensive basic telephones from their telephone companies. That was before FCC reform opened up telephones to competition from the private sector in the early 1980s. Similar to what happened with telephones, the White House hopes cable box reform will open up innovation.

The FCC proposal “will allow for companies to create new, innovative, higher-quality, lower-cost products,” wrote Furman and Zients. “Instead of spending nearly $1,000 over four years to lease a set of behind-the-times boxes, American families will have options to own a device for much less money that will integrate everything they want—including their cable or satellite content, as well as online streaming apps—in one, easier-to-use gadget.” (Emphasis theirs.)

Opposition from Big Cable and Congress

Not surprisingly, Big Cable isn’t happy about opening up the cable box marketplace. Open standards for set-top boxes would require cable companies to give tech companies access to cable content and all the benefits that comes with acquiring a new user base, such as access to a user’s viewing habits. However, if a separate FCC proposal on privacy is passed, the cable industry may no longer be able to sell such viewership data to advertisers. Unlocking cable boxes could also substantially cut into the cable industry’s $19.5 billion in annual box rental fees.

The cable industry has won the support of both Democrats and Republican members of Congress, who have pushed back against #unlockthebox.

NCTA President Michael Powell isn’t backing down. “The policy blows we are weathering are not modest regulatory corrections,” Powell said in a speech last month, according to Reuters. “They have been thundering, tectonic shifts.”

Meanwhile, members of the Congressional Black Caucus are against cable box reform for an entirely different reason: Third-party streaming services may have no obligation to prioritize diversity content such as BET and Fuse. Congressional Black Caucus Chair G.K. Butterfield and BET Chairman Debra Lee, who also serves on the board of Twitter, believes minority programmers will lose out if the FCC proposal goes into effect.

“While we must be open to the rising cultural expectations to make programs available on-demand or through streaming services, we also have to balance these interests with the assurance that we are not pitting the few diverse programmers out there against each other or allowing some to pick winners and losers,” Butterfield said in a May press conference, according to Seattle Medium.

Meanwhile, black programmers such as DeShuna Spencer, CEO of KweliTV, a streaming service for the African diaspora community, have emerged as supporters of the FCC proposal. Why? The cable industry doesn’t have the best track record with offering content to people of color either. Opening up the market to streaming services could offer more opportunities for diverse content.

.@DeShuna of @kweliTV describes how minority and female programmers can't get funding because of Cable's closed universe. #UnlockTheBox

One other challenge to cable box reform from Congress came earlier this week. A House panel recently voted to approve a fiscal 2017 funding bill that contained an FCC policy rider. As reported by TechDirt, the rider would bar the FCC from moving forward with cable box reform unless the agency conducts an impact study. If signed into law, such a requirement could significantly delay the FCC rule from going into effect.

“…This Committee has strong concerns that the FCC seems to be prolonging their pattern of regulatory overreach with its recent set-top box proposal,” Crenshaw said in a statement. “And so, we include language that requires the FCC to stop and study this controversial rule before they can move any further.”