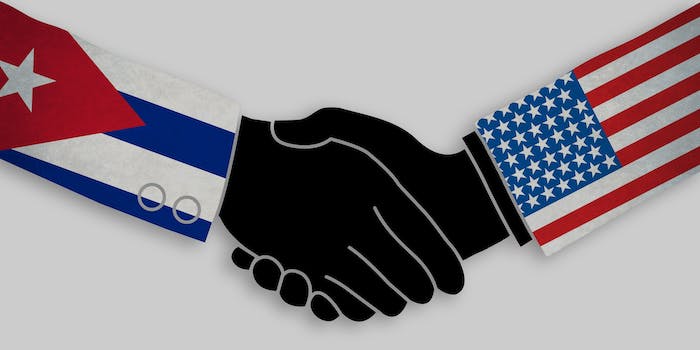 After 54 years, the United States embassy has reopened in Cuba.

The American flag is flying over Cuba for the first time in half a century.

.@JohnKerry: "Thank you for joining us at this truly historic moment" as flag is raised. http://t.co/qUw1wnPWaN pic.twitter.com/4rA6BCAezc

“We are gathered here because our leaders made a courageous decision to stop being prisoners of history,” Kerry said at the embassy earlier today.

While diplomatic relations have been restored, tensions remain between the two countries. Hours before the flag-raising ceremony at the U.S. embassy, Cuban state media released an article under former leader Fidel Castro’s name that blasted the U.S. for the damage cause by the embargo. Castro also mentioned the U.S dropping an atomic bomb on Japan.

JUST IN: American flag raised over the US Embassy in Cuba for first time since 1961 – @ABCPolitics pic.twitter.com/LkF2g2mgH1

“We are all aware that, notwithstanding President Obama’s new policy, the overall U.S. embargo on trade with Cuba remains in place and can only be lifted by Congressional action—a step we strongly favor,” Kerry said.

Members of the 2016 GOP presidential field used the occasion to criticize the Obama administration’s move to restore the U.S. relationship with Cuba, which including removal of the country from list of terrorism sponsors.

“President Obama has rewarded the Castro regime for its repressive tactics and persistent, patient opposition to American interests,” Rubio said Friday. “He has unilaterally given up on a half-century worth of policy toward the Castro regime that was agreed upon by presidents of both parties.”

“Larry, Mike and Jim had done their jobs,” Kerry said, “but they also made a bold promise—that one day they would return to Havana and raise the flag again.”