It's part of a vast network.

“I Love America” is a Facebook page with more than 1 million followers drawn to its hyper-patriotic content, conspiracy theories, and support for Donald Trump.

This morning, Popular Information, a newsletter by Judd Legum, broke the news that “I Love America” is run by Ukrainians. It’s part of a vast network of Ukrainian-run pages that routinely reach millions of unsuspecting Americans. These pages frequently cross-promote and cross-post each other’s content.

1. A massive Facebook Page called "I Love America" — which has 1.1 million followers — is actually run by Ukrainians

It's the tip of the iceberghttps://t.co/0MRNxVJbUJ

According to Facebook’s transparency feature, “I Love America” is managed by 13 people; 10 are in Ukraine, and one each are in France, Kazakhstan, and the United States. Many of its posts are divisive and inflammatory, such as the meme it posted on Sept. 9 of an eagle’s face overlaid with the text, “Do you agree? Instead of taxes helping to fund Middle East countries that hate America, we should be helping the homeless veterans who love America. Yes or no?” This post has 65,000 likes, 25,000 shares, and 11,000 comments.

From June 16 to Sept. 22, Facebook social analytics company Crowdtangle found that “I Love America” had reached more than 20 million users.

Legum discovered that “I Love America” also recycles content that was posted on pages managed by the Internet Research Agency, a Russian troll farm that created fake Facebook pages to benefit President Donald Trump in the 2016 election. This content includes pro-Trump propaganda, debunked conspiracy theories, and memes that denigrate undocumented immigrants and express disapproval of the NFL anthem protests.

The goals appear to be to support Trump’s reelection and foster discord by playing on existing divisions in American society. 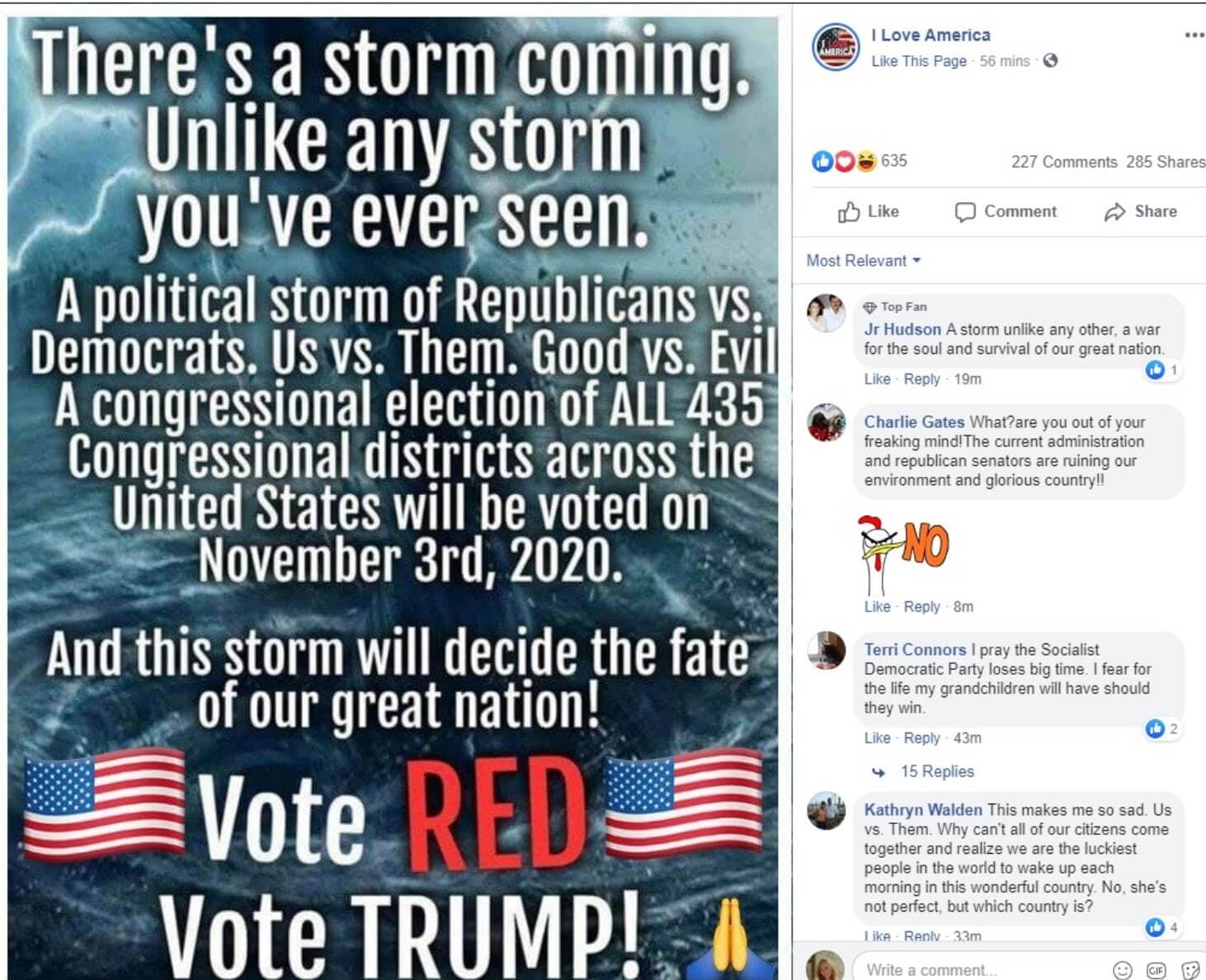 Other pages in the network of Ukrainian-managed pages include patriotic-themed “Like our page if you are proud to be an American” and “Everyone should respect and stand for our American Flag. God Bless.”

Some focus on cute animals and Jesus.

“Cute or Not?,” a page run by eight Ukrainians, typically sticks to stock images of puppies with the occasional police dog thrown in. Recently, Legum found that “Cute or Not?” had begun cross-posting content from Ukrainian-managed “God bless Donald and Melania Trump and God bless America” and “US Federal Insider” pages. The “I Love Jesus Forever” page has also started cross-posting pro-Trump memes from “God bless Donald Trump and God bless America.”

By amassing large followings—”Cute or Not?” alone has more than 400,000—these pages have created an audience for this content. Many would think it odd for a group of foreigners to create English-language pages for Christians and animal lovers that purport to be American. Their true purpose may have been revealed when these pages recently began posting pro-Trump content, such as the meme below, which “I Love Jesus Forever” cross-posted from “God bless Donald Trump and God bless America” on August 16.

Facebook told Legum that these pages are not violating its Community Standards. The company prohibits “coordinated inauthentic behavior,” defined as “when groups of pages or people work together to mislead others about who they are or what they are doing.” The policy bans multiple accounts from working together to mislead people about their content’s origin; in order to gain shares, likes, or clicks; or to conceal or enable Community Standards violations.

Nevertheless, experts Legum spoke with were troubled that foreign actors were using Facebook to influence Americans and concerned that Facebook was not intervening.

The New School professor and social media expert David Carroll told Legum that this suggests Facebook has “not decided to use their own detection technology to prevent further dissemination by ‘inauthentic coordination.'”

There is thus far no evidence that pages in the Ukrainian network are affiliated with a foreign government. Grafika investigation director Ben Nimmo told Legum that the pages lacked the sophistication of government actors, and opined that the pages looked more like clickbait operations.

But, as Legum pointed out, the effect may be the same.

“Still, the impact on American voters could be the same, especially if the tactics include bombarding Americans with false and divisive political material,” he wrote.