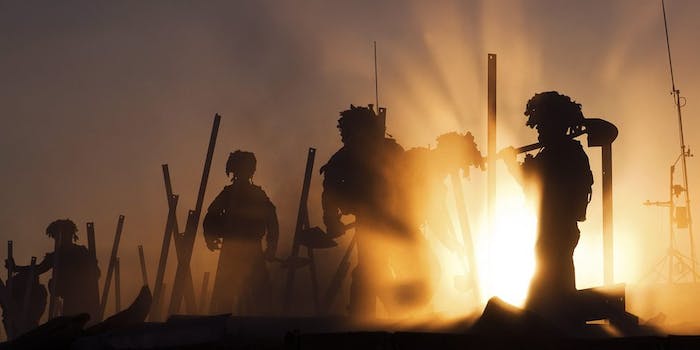 "If they had the capability that we would like, and if the vetting authority was happy, then why not?"

The new head of the United Kingdom Army’s Joint Cyber Reserve Unit said that he would welcome convicted hackers into the service, should they be able to show the requisite skills and attitude.

“If they could get through the security process, if they had the capability that we would like, and if the vetting authority was happy, then why not,”  Lieutenant Colonel Michael White told the BBC program Newsnight.

At the September launch of the unit, U.K. Defence Secretary Philip Hammond said that Britain would build “a dedicated ability to counterattack and if necessary to strike in cyberspace.” The armed forces as a whole do not have an “absolute bar” on recruiting former criminals, and Hammond said that “former hackers would be assessed on a case-by-case basis,” The Independent reports.

Despite hackers’ reputation for being anti-authoritarian, many are fixated more on the problems before them than on philosophy and politics. Others are “patriots,” for lack of a better term, like The Jester, the pro-American hacker who has targeted WikiLeaks and Jihadi websites.

NSA head Gen. Keith Alexander regularly spoke at hacking conventions until Edward Snowden’s NSA leaks caused so much tension between hackers and the agency that his presence became untenable. He had to cancel his appearance at the prominent Black Hat conference, which had invited him to give the keynote speech.

To say there is no one out there to prosecute military cybersecurity who hasn’t been arrested for hacking would be untrue. But, at least in the U.S., where hackers are prosecuted under the heavily criticized Computer Fraud and Abuse Act (CFAA), ruling out the hiring of convicted hackers would significantly shrink the candidate pool for cybersecurity positions.

Perhaps this means Jake Davis, the LulzSec hacker arrested for targeting companies that aggressively pursued copyright enforcement and supported legislation against file-sharing sites, will in short order be addressed not as “Topiary,” but as Lieutenant Topiary.

“What makes you think I’m not already Lieutenant Topiary?” Davis asked The Daily Dot when reached for comment.

The Daily Dot reached out U.S. Cyber Command and the Pentagon regarding U.S. policy on hiring convicted hackers, but has yet to receive a response.

Update: Cynthia O. Smith, a spokesperson for the U.S. Department of Defense, gave the Daily Dot this statement about the military’s policy on recruiting convicted hackers:

The military does not allow enlistment of anyone who is pending a criminal charge or serving under any type of judicial restraint (probation, parole, or confinement).

The services continue to ensure that recruiting missions are met with above-average young men and women from across America. There will always be deserving individuals with conditions or issues that warrant review, but who are worthy of service. The department will strive to maintain high standards ensuring that military recruits continue to surpass the overall qualifications of the contemporary American youth population.

H/T The Register | Photo by UK Ministry of Defence/Flickr