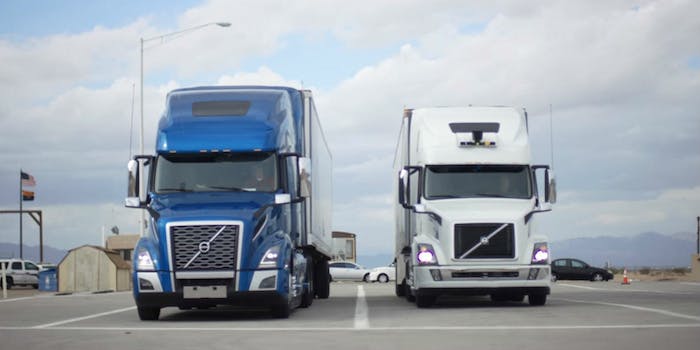 Human jobs haven't been affected...not yet.

Uber’s self-driving trucks are now driving on U.S. roads with no human interaction—and for now, they’re not getting rid of jobs.

Facilitated by Uber’s new fright hauling app, the shipments are being made in Arizona where the ride-hailing giant is testing self-driving cars. As it stands, the autonomous trucks are only used for long-haul trips and will require a human-driven short-haul truck to complete the final few miles.

It does this using so-called transfer hubs. When an Uber truck completes its journey, it transfers its cargo onto another traditional short-haul truck that does the rest of the work. Likewise, when a short-haul truck is called upon the Uber Fright app to move cargo, it drives out to the edge of town and plants its trailer onto an Uber self-driving truck so it can do the highway driving.

That’s to say that even after 2 million miles of testing, Uber’s technology isn’t advanced enough for the unpredictable conditions of inner cities. A human operator is positioned at all times, even when the self-driving truck is driving on a straight highway through the desert. Because of this, Uber argues its trucking business will result in more jobs, the Verge reports.

Uber published a video on Tuesday illustrating how it expects the transfer to operate.

There are still a number of unanswered questions regarding Uber’s autonomous trucking platform. Namely, how many autonomous trucks are in its fleet, who can use the app, and what cargo is being delivered.

“We’re not at the point where that system is running 24-7 at all times,” Woodrow told the Verge. “But that’s the direction that we’d like to get to.”

Uber launched the trucking version of its ride-hailing app in May 2017 to help companies quickly find drivers. With its app in place and engines fired up, Uber can start taking bigger strides to disrupting the industry, much like its self-driving division did to taxis.

But it still faces a number of challenges, including navigating government regulations and convincing companies its self-driving technology is safe enough to invest in. Not to mention the costs associated with establishing a fleet of long-haul semis. Then, of course, there is competition from the likes of Tesla and Embark.

One thing Uber can stop worrying about is the heated lawsuit filed against it by Waymo, Alphabet’s self-driving car unit. In 2016, Uber purchased Otto, a self-driving startup led by former Waymo employee Anthony Lewandowski. The company was suspiciously purchased by Uber for $680 million just eight months after it was formed. Waymo responded by slamming Uber with a lawsuit, alleging Lewandowski had stolen 14,000 confidential files on Waymo’s self-driving technology and handed it over to Uber. Last month, the companies surprised everyone by agreeing to a settlement of about $244 million.

With the lawsuit behind it, Uber can start looking to the future, one where humans aren’t required.