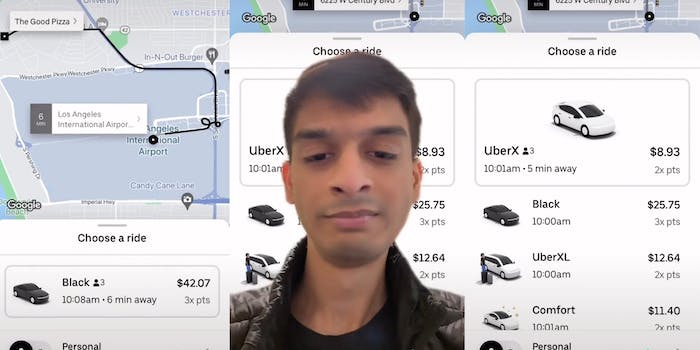 ‘Want to see how Uber price gouges you?’: Customer saves over $30 on an Uber with ‘pro tip’

'I even do this with the bars at a night out.'

A video showing a money-saving tip for Uber users recently went viral after being shared on TikTok.

In the video posted by user Nikhil (@nikhilslife), he shows a prospective Uber ride between Los Angeles’ LAX airport and a restaurant “that’s about three miles away.” The cost for this ride is just over $42 with Uber Black and around $39 using UberX.

“But, if I move my pickup destination from LAX to the Hyatt Regency, which is a hotel that is literally 500 feet away from LAX-it, it’s now going to cost me $8.93,” he concludes.

“LAX-it” refers to LAX’s stand for taxis and rideshare apps.

The video was then reposted by user Sarah (@sarah._.frank) as part of her “duetting videos people might find helpful” series. Sarah’s repost has over 2 million views.

In the comments under both videos, users first tried to explain the price discrepancy.

“That’s because most airports charge ride shares and taxis so they include that in the price,” one user claimed.

This is true, according to Uber’s website, though it’s unclear if that’s the only factor at play in calculating the higher price.

Other users shared that, while this tip is interesting, it may not be applicable in the real world.

“The areas around airports typically aren’t the most walkable unfortunately + with bags and luggage,” a commenter pointed out.

“Yup came here to say this,” another responded. “Specifically LAX you can’t walk to.”

However, other commenters offered a workaround that would allow users to still use this trick.

“Always takes the free shuttle to anywhere outside the airport and then taxi, saves time and money,” a TikToker wrote. “Works literally anywhere in the world.”

“For LAX take the free shuttle to the green line and then get an Uber at the metro line stop,” a second specified.

Additional users jumped in to offer their positive experiences using this trick.

“No fr I was in the cleveland airport and it was nearly $100 and I moved like 20ft and it was suddenly $30,” a commenter claimed.

“I even do this with the bars at a night out,” a subsequent user explained. “I just walk a few hundred feet away and prices get cut in half.”

We’ve reached out to Nikhil via email.

Update 2:36pm CT August 6: In an email to Daily Dot, an Uber spokesperson stated that prices are calculated based on a number of factors including location, time of request, and supply and demand. The spokesperson also noted that these aspects can be affected by outside forces like weather and local events.

The spokesperson further reiterated that airport surcharges affect prices and noted that these were not specific to LAX. Additionally, they stated that potential riders are able to see the full fare in advance of a ride request, which already takes all pricing factors into account.

Finally, the spokesperson reminded customers that airports like LAX have signs indicating that hotel shuttles are only for hotel guests and not for rideshare pickup.