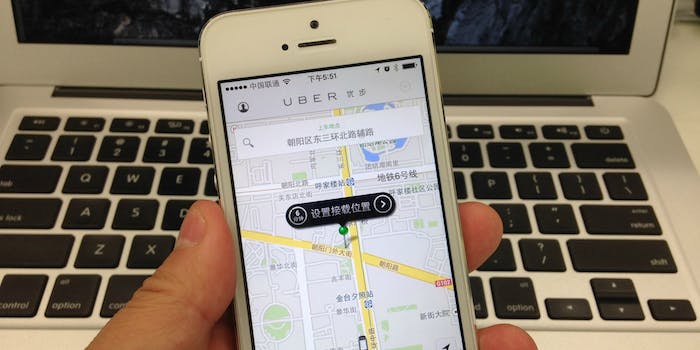 Photo via bfishadow/Flickr (CC BY 2.0)

How does this even happen?

When Uber told New Yorker Jaime Hessel that it would credit $15 to her account after a scary ride, it seemed like everything had been squared away.

Her driver had taken the scenic route from her East Williamsburg apartment to Midtown East, and he had driven frighteningly enough to prompt Hessel to hop out of the car a block away from her destination. Uber promised it would make things right. But then Hessel received two emails from Uber, and there was something fishy about them. As she told Gothamist:

“I received two e-mails yesterday. One about the status of my credit saying it should be there, it’s been processed. And then a second e-mail saying they are trying to charge me $16,000, but then $4,000 had already been taken care of, so I owed them $12,000. I couldn’t even tell you what this was about, because I checked my credit cards and there was no charge. I e-mailed them numerous times and they kept giving me the runaround. I was furious. I mean, you can’t give me an explanation?”

“Furious” is probably an understatement when you look at your Uber account and see this: 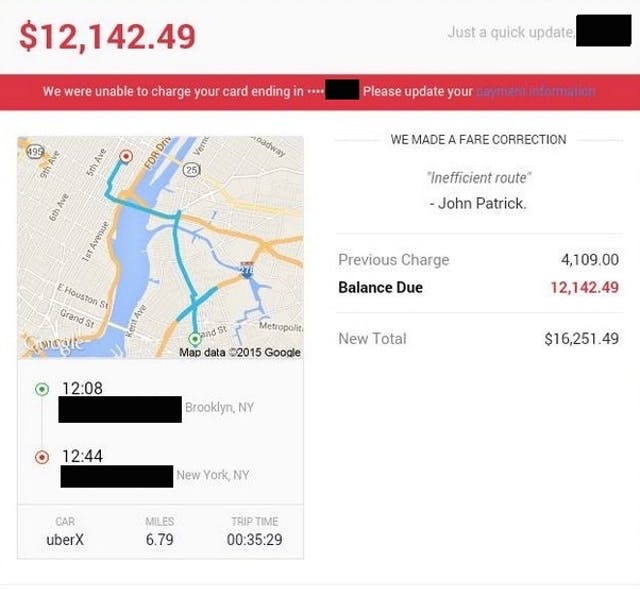 Based on the screenshots of Hessel’s correspondence with Uber that Gothamist published, one thing seems clear: The charge was an honest mistake, but Uber has fairly terrible support reps. When somebody tells you they need to speak to a “Tier 2 agent,” you’re getting into Comcast levels of customer-service hell.

Although things worked out in the end, that might be due to dumb luck: Hessel’s initial $15 refund was unable to enter her account, because her credit card on file had happened to expire on the day the transaction was attempted.

Had the card not expired, the $12,000 charge—which then mysteriously became a $16,000 charge—might have actually gone through.

When asked by Gothamist if she believed the charges would hit her account, she said:

“No, I don’t. They contacted me late last night and said, ‘We’re sorry for the mixup. We’ve cleared the outstanding charge, you’ll still receive your $15 adjustment.’ But I had already explained to them that I don’t want to give them my new credit card information. If my card hadn’t expired when it did, they could have easily charged my card $12,000.”

After being told the mix-up had been handled, she received this receipt the next morning: The lesson? Always check your Uber receipts very carefully. And make sure your credit cards expire on a regular basis.