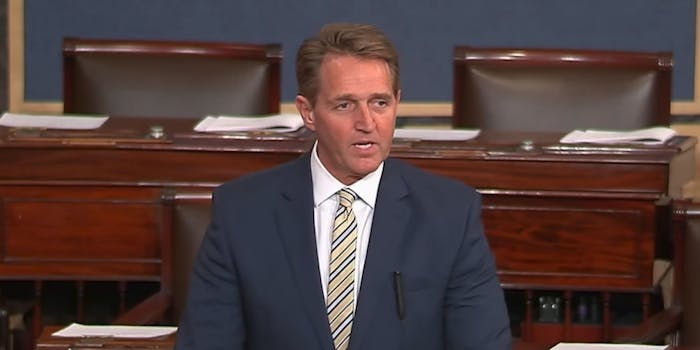 Probably not the turnout he was hoping for.

On Wednesday, Sen. Jeff Flake (R-Ariz.) criticized President Donald Trump for his treatment of the press. But reportedly only two senators were on the floor when he made his remarks.

Flake, who has feuded with Trump in the past, condemned the president’s frequent lashing out at the press—much like Sen. John McCain (R-Ariz.) did in a Washington Post op-ed on Tuesday night. In the speech, Flake compared Trump’s anti-media rhetoric to former Soviet dictator Joseph Stalin.

“Mr. President, it is a testament to the condition of our democracy that our own president uses words infamously spoken by Josef Stalin to describe his enemies,” Flake said, later adding: “This alone should be a source of great shame for us in this body, especially for those of us in the president’s party. For they are shameful, repulsive statements. And, of course, the president has it precisely backward—despotism is the enemy of the people. The free press is the despot’s enemy, which makes the free press the guardian of democracy. When a figure in power reflexively calls any press that doesn’t suit him ‘fake news,’ it is that person who should be the figure of suspicion, not the press.”

Flake’s sentiments were shared by his fellow Arizona senator, McCain. In his op-ed, McCain wrote that Trump’s attacks against the press were “being closely watched by foreign leaders who are already using his words as cover as they silence and shutter one of the key pillars of democracy.”

However, the speech was not heard by many of his Senate colleagues. The Hill reports that only Sen. Amy Klobuchar (D-Minn.) and Sen. Dick Durbin (D-Ill.) were in the Senate chamber during the speech.

Durbin, speaking on the Senate floor, seemed to agree with Flake’s assessment of the role of the press in the Trump administration.

“I’m afraid once again, that his actions will cast a shadow over our constitutional commitment to the basic freedoms we enjoy in America,” he said. “We all know why freedom of the press was included in the bill of rights–because the founding fathers, those who crafted those critical words that have left us for more than two centuries, believed that there should be accountability.”

This is not the first time Flake has criticized Trump on the Senate floor. In October, the senator announced he would not seek re-election in 2018 and warned the Republican party not to become complicit in an “alarming and dangerous state of affairs” under Trump.