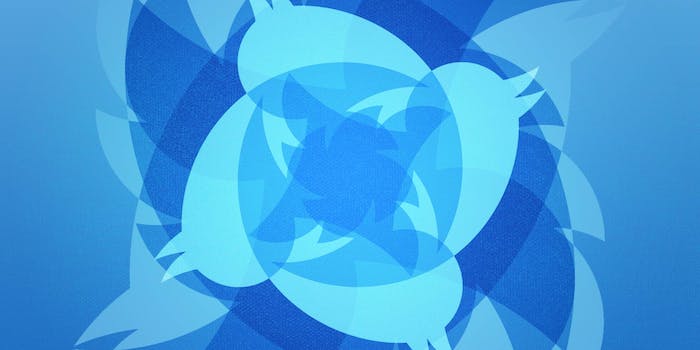 The voices are quieter, but they remain.

On Sunday, an image circulated showing Islamic State supporters allegedly threatening Jack Dorsey, a founder of Twitter, in retaliation for the social network engaging an escalating war against the militant group.

ISIS’s hostility toward Twitter comes as no surprise. The extremists rely heavily on American-built social media to provide a megaphone. Lately, however, the networks have fought back and made the famously tech-savvy Islamic State quieter than ever.

The social media that enabled ISIS to become the most famous terrorists on the planet—Twitter, YouTube, and Facebook—is now waging a war of sorts against them. In recent months, Twitter has gone through numerous waves in which tens of thousands of ISIS accounts have been banned in an attack designed to lessen their influence.

Last week was supposed to be a big moment for the self-appointed caliphate.

Facing Twitter’s sustained offensive, ISIS laid out a plan: a cyberprotest in favor of a right to free speech in order to gain the attention of the world.

“It didn’t work out so well, however, as the group’s many enemies decided to crash the party,” extremism researcher J.M. Berger pointed out.

ISIS’s big moment was spoiled by Kurds and conservative American activists who rhetorically attacked their common enemy so that neither the Arabic- nor English-language campaign had any success whatsoever. By the end of the day, the once-mighty ISIS social media jihadists were outnumbered and outdone during their own highly publicized campaign.

Twitter, it turned out, made it impossible for ISIS to win by setting in motion the biggest strike against the Islamic State that social media has yet seen.

“It has never happened before that Twitter suspends randomly and without graphic photos or attack on individual or threat,” reporter Elijah Magnier told the Daily Dot. “Some accounts were suspended 3-7 times within one single day. But the incentive of the campaign kept these Islamic State supporters coming back again and again.”

One of the most popular ISIS-supporting accounts on Twitter estimated that 20,000 accounts were banned leading up to Feb. 26.

Twitter’s war against ISIS started around the time video of journalist James Foley’s beheading became a certified viral sensation. Ever since that milestone moment, the Silicon Valley firm has become increasingly aggressive.

The torrent of suspensions means less propagandizing and more menial work. Building up the following and volume of a major account takes time. ISIS has a procedure for new accounts that involves recommendation from official supporters and then extended promotion to gain new followers.

“It is a hassle, at the end of the day,” Magnier explained.

The hassle means ISIS spends more time and effort than ever before to maintain their social media presence. However, while the volume of their voices may have diminished, they’re still very much a presence on many of the Internet’s biggest social networks.

More than 700 Westerners have been recruited to travel to Syria and fight with ISIS over the past two months alone, according to Director of National Intelligence James Clapper. That recruitment almost always happens online.

“There are people who are doing this alone without any guidance, or they’re in contact with people through the Internet about giving them various hints on which way to go,” Thomas H. Henriksen, a senior fellow at the Hoover Institution, told the International Business Times. “There is some guidance; some of these people are very young.”

Western countries have stepped up security and surveillance to counter the recruiting efforts. Online threats to kill President Obama and carry out other terrorist attacks led to the recent arrest of three New Yorkers attempting to join ISIS. The same day, London police discovered the disappearance of four teenage girls was, in fact, a successful recruitment operation by ISIS.

Twitter’s offensive against ISIS isn’t unique. The hacktivist collective Anonymous has sought out and maintains a long list of ISIS-related accounts, many of whom have been banned shortly after being outed, suggesting some kind of connection between official Twitter efforts and Anonymous’s #OpISIS. Then again, one of the top accounts in that campaign was recently suspended.

“I wasn’t [surprised] actually,” Magnier said. “There are many volunteers and hackers behind IS accounts suspending and hacking these. It is not only Twitter hunting down IS.”

ISIS’s notoriously high-quality video propaganda stayed silent on the big day too. YouTube became more aggressive in banning any ISIS-related videos, shutting down a key propaganda tool—but not shutting them down for good.

“ISIS supporters have the stamina to return the following day and the day after and the week after on the same YouTube with the same video,” Magnier said.

Still, the loud failure and quiet voices of ISIS on what was meant to be a day of international support for the Islamic State sends a clear message about the trajectory of their online operation.

“It may be time to retire the ‘ISIS as unstoppable social media behemoth’ trope,” Berger wrote.

We have reached out to Twitter for comment, and will update if and when we hear back.