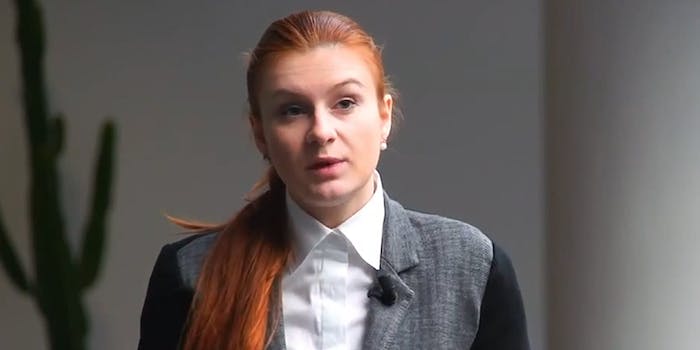 Several news outlets are reporting that the woman in the photo is not Mariia Butina.

Thousands of Twitter users are pointing to a photo they believe shows Mariia Butina, a Russian national who was charged on Monday for conspiring against the United States as a spy, standing in the White House during a controversial meeting President Donald Trump had with officials from Russia just days after firing former FBI Director James Comey.

However, despite the online chatter, the woman in the photo is not Butina, but rather a National Security Council staffer, officials tell the Daily Dot.

Who is Mariia Butina?

The Justice Department alleges that she also tried to work on a line of communication between Russia and a political party though a “guns rights organization,” believed to be the National Rifle Association (NRA), as CNN points out. Butina’s arrest became public knowledge just hours after Trump refused to condemn Russia’s alleged meddling in the 2016 election, a denial that sparked a wave of criticism–even from fellow Republicans.

The photo in question was taken in the Oval Office when Trump, during a meeting last summer, reportedly shared classified information with Russian officials including Foreign Minister Sergey Lavrov and Ambassador Sergey Kislyak. This was the same meeting where the president reportedly called Comey, who he had just fired a “nut job.”

Journalists online exploded with speculation, but once several news outlets pointed out the woman was not Butina, they began deleting their tweets.

OK all, this may be Cari Lutkins from the NSC. I may delete this tweet… https://t.co/DI0zpju68I

On Tuesday morning, BuzzFeed reported (as did AP) that the woman at the center of the online speculation was an NSC staffer.

The Daily Dot can confirm the woman was not Butina.

But because of the frenzy, and how retractions don’t get the same attention as initial accusations, thousands online are claiming Butina was at the meeting.

Could this be spy #MariaButina in the OVAL OFFICE during the infamous #Russian visit ?!? pic.twitter.com/IFO0s5SLwb

As the debate continued online, others started poking fun at the absurdity of it.

I thought this was a photoshop, but it’s not. This is Maria Butina — arrested for being a Russian spy — in the Oval Office with Trump. pic.twitter.com/yeieUYPhwf

I thought this was a photoshop, but it's not. It's Maria Butina — arrested for being a Russian spy — in the Oval Office with Obama. pic.twitter.com/Whd8bre8t7

Butina’s lawyer told the New York Times that she is “not an agent of the Russian Federation” and added that there is “simply no indication of Butina seeking to influence or undermine any specific policy or law.”