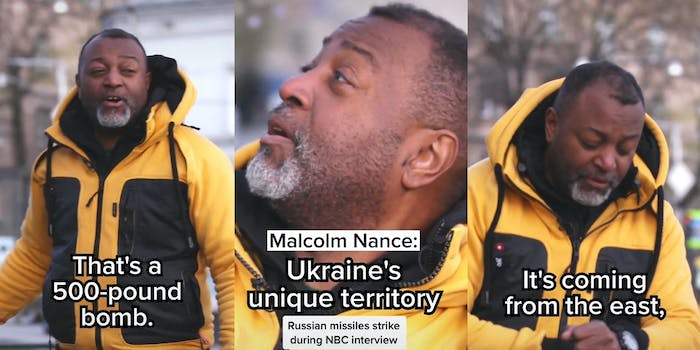 Twitter users spar over whether to admire or mock Nance's actions.

Twitter has spent much of this week trolling a former MSNBC analyst in Ukraine over his reaction to a reported Russian missile strike.

Malcolm Nance, a Navy veteran who recently left the network and reportedly joined Ukraine’s fight against the Russian invasion, was speaking with NBC News in Lviv on Monday when the incident unfolded.

“Are we in an air raid?” Nance asks, cutting off the interview as the sound of missiles roar overhead. “

Nance proceeds to narrate a questionable play-by-play of the strike, using his watch to determine the direction of the attack while announcing the alleged size of the missiles’ warheads.

“Wait, there’ll be three! Wait for one more,” Nance says while pointing at the sky. “They fire them in 30 second intervals.”

The former media pundit goes on to repeatedly use the phrase “standby” while further outlining details on the strike.

Supporters of Nance were quick to praise the video, arguing that it clearly showcased the veteran’s expertise.

Malcolm Nance is just so cool…” one YouTuber wrote.

But not everybody was impressed. And many argued that some of Nance’s remarks weren’t correct.

“First it’s a bomb, then it’s a cruise missile then says something about caliber,” another YouTuber added. “What a joke.”

A longer version of the video posted to TikTok went viral as well and quickly made its way to Twitter, where the trolling only intensified.

Many were quick to note that despite Nance’s intense response, Ukrainian pedestrians appeared to be walking nonchalantly in the background.

“The drama. The danger,” one Twitter user wrote. “Yet the people in the background are walking & acting normally & are on their phones.”

Unsurprisingly, support of mockery of Nance was divided largely down partisan lines. Even conspiracy theorists got in on the fray, arguing that Nance was actually in the U.S. and that the entire video was staged.

“This. The intelligence. The calm. The professionalism,” one said in defense of Nance.

Still, many users took issue with the content of Nance’s remarks, mockingly referring to the segment as “top-notch reporting.”

Right-wing commentator Jack Posobiec also helped keep the mockery of Nance alive and well by repeatedly referencing the video throughout the week.

The incident comes on the same day that Nance announced on Twitter that he was “DONE talking” and intended to join the foreign legion in Ukraine.