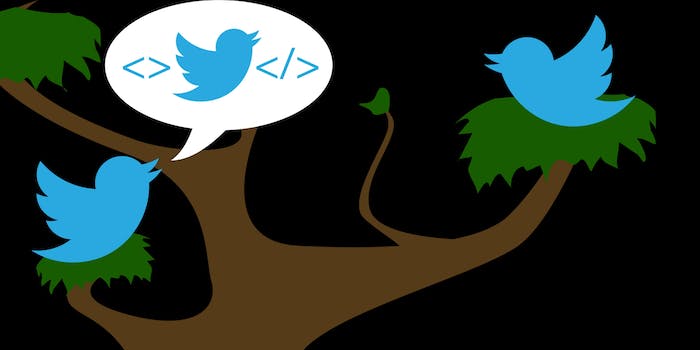 Tweets are set up to be shared. Within Twitter, users can re-tweet stuff they like. To take a tweet somewhere else, Twitter provides an embed option, so people and organizations (like the Daily Dot) can show what someone says, exactly how they said it, with interactive metadata attached. Twitter has offered embedded tweets for years, and in 2012 it upped the embed ante by allowing users to embed whole Twitter timelines, not just single tweets.

Now, it appears Twitter is testing a push notification that tell users when their tweets have been embedded.

Buzzfeed’s Jessica Misener pointed out she received a push notification from Twitter after a previous tweet of hers was embedded on our website in an article:

is this a thing now? pic.twitter.com/EsHKHdB4zg

Twitter is easing up on email notifications and testing a series of new push notifications to alert users to “significant engagement” when their tweets receive an unusual number of favs or RTs; this may be part of that test. A Twitter spokesperson told the Daily Dot that the “significant engagement” test was available to certain verified users, and the embed alert falls under that umbrella. This means that, right now, they’re just an experiment available to people with the little blue checkmark.

Even though embedding has been a part of Twitter’s service for a while, not everyone gets jazzed when what they tweet shows up on a third-party website. A few months ago, the ethics of embedding tweets was debated in the media after a different Buzzfeed writer included tweets from users who shared their experiences in an article about sexual abuse. If this embed alert goes mainstream, it could appease users wary about having their tweets embedded in different publications without their knowledge.

Then again, this is still just a test, one of many. And since Twitter experiments so frequently, tests regularly fizzle out in the early stages… so, for now, if you don’t have a verified account, there’s still no way of knowing where your tweets are getting embedded. And even if  this feature were pushed through and regular users got it… there’s still no way to know if someone screengrabbed your tweet and uploaded it elsewhere.

At least not yet…