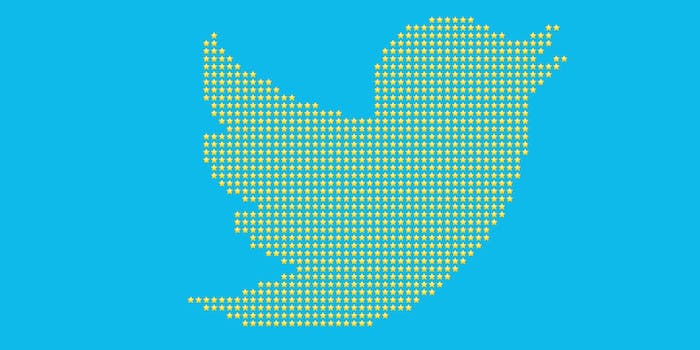 A data miner’s guide to crafting the perfect tweet

No word yet on how to suck less at Snapchat.

You’re already laughing to yourself as you type in the tweet. It’s a diamond. You know it. The wording is on point, your hashtag use is sparing but impactful. Now, you just have to sit back and wait for the favs to roll in.

Then: crickets. A digital dustball rolls past an abandoned shack. You wonder if you’ve sixth-sensed yourself, and you have, in fact, been dead all along. How else to explain the total lack of engagement from your piece de tweetsistance?

Sometimes it’s hard to figure out what makes a tweet popular. That’s where Chenhao Tan comes in. Tan led a team at Cornell University in data-mining Twitter to discover what makes tweets popular. The team analyzed the tweets of 236,000 users looking for pairs, or tweets with similar topics. They found 1.8 million pairs. They then winnowed the tweets down by concentrating on pairs from users with more than 5,000 followers, sent within 12 hours of each other.

What they found revealed that wording does matter: Even when tweets were on the same topic, one would often do much better than another.

The research team put together a quiz to see whether ordinary people can identify a popular tweet against a less-popular tweet. They can, it turns out, with 61 percent accuracy. The team also developed an algorithm that can guess which tweet will be more popular than another, which has 66 percent accuracy.

The popular tweets were often more clearly worded, and used language that appealed to the user’s community of followers. They also sometimes directly requested a retweet or fav, asking their followers to share their tweets explicitly (which seems awful, please don’t do that). Twitter users who had developed a sort of consistent authorial voice on the service did better; people picked tweets that had language similarities to their previous tweets.

If you’re uncertain how to word the perfect tweet, the team lets people input two different versions of the same tweet to test against its algorithm, so you can always use that to try and pick the best phrasing. Here’s a screenshot of what that process looks like: 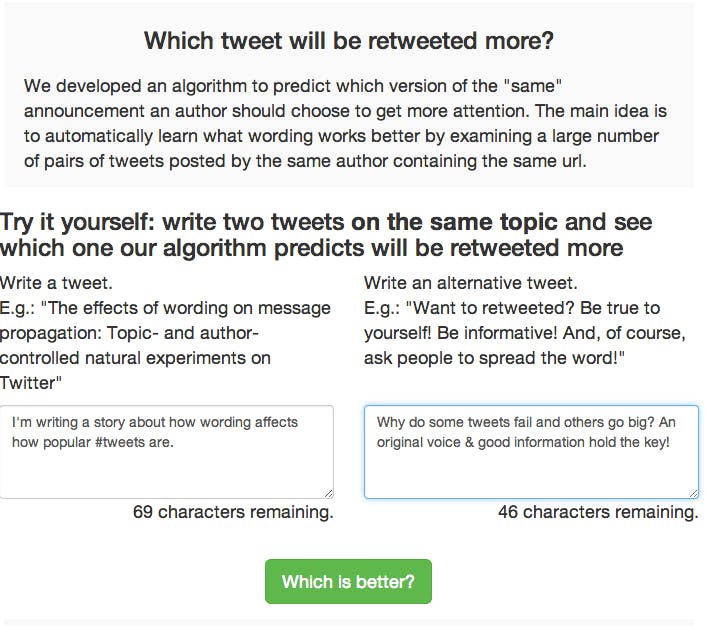 The findings are pretty damn vague, which is frustrating. but there are a few things you can glean from them to put into practice. First, if you’re agonizing over the wording of your tweet, go with whatever sounds the most natural coming from you. We aren’t all @dril. Second, if you really want something to get retweeted, asking your followers to share does work. (Use that sparingly or risk annoying everyone.) Third, make sure what you’re tweeting makes sense. That seems super-obvious, but even seasoned Twitter users sometimes send out what could’ve been a hit and then realize they forgot a word and now it doesn’t really make sense. So, basically, proofread your tweets.

You can test which of your tweets is best against the team’s algorithm here.