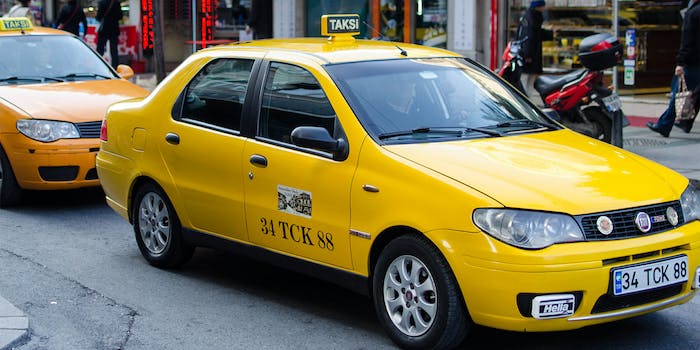 All taxicabs in Turkey’s business capital, Istanbul, will soon have internal cameras to record passengers during trips and retain the data for the use of law enforcement.

The move follows a new policy issued by the Turkish National Police in February, requiring all public transport vehicles to record travelers for “helping investigate primarily terror incidents, solving crimes, and gaining fast access to evidence and information regarding suspects.” After the initiative rolls out in Istanbul, as many as 30 other Turkish cities are planned to have cameras on taxicabs, shared taxis, and bus services.

The policy implicitly refers to the Istanbul nightclub shooting on New Year’s Eve that left 39 dead. After the attack, police investigators examined hours of security footage to track the ISIS gunman, Abdulkadir Masharipov, who arrived and left the scene by taxi despite multiple police checkpoints. The U.S. National Security Agency later claimed that its warrantless surveillance program helped the investigation, which the Turkish government denied.

Promoted as “secure taxi” on pro-ruling party media channels, the iTaksi project drew criticism from lawyers and the opposition party on privacy and mass surveillance grounds. The owner of the project is the Istanbul Municipality, run by President Recep Erdoğan’s AK party. Responding to public outcry, ISBAK A.Ş., the municipality’s ‘smart city’ company, claimed the cameras will not record audio (conflicting with earlier statements) and that the data will be kept encrypted offline—allowing only the law enforcement officials to view its content during investigations. However, the revealed features of the hardware and the mobile application are not reassuring.

According to the FAQ for the drivers on the project website, the “panic button” broadcasts the camera feed live to the police, together with the information of the passenger collected by the iTaksi mobile app. The promotional video of iTaksi shows that the app collects name, mobile number, precise location by GPS, travel history, and the credit card information of the passenger.

Head of Istanbul’s Chamber of Taxi Drivers, Yahya Uğur, who previously held a seat on the city council under the banner of Erdoğan’s ruling party, defends the project on public safety grounds and expects more inhabitants to use the cabs. A private security company already developed a proposal for integrated facial recognition system at taxicabs that alerts the police if a passenger matches records on the national suspect database.

Concerns for the vaguely defined legal access to camera and app data has only increased after an opposition lawmaker, Barış Yarkadaş, revealed that the software firm behind the iTaksi app is the son of a deputy from Erdogan’s party. Back in December, news outlets reported a pro-Erdoğan taxi driver snitching on a passenger to the police with a recording of her criticizing the government during a ride.

In addition to its surveillance capabilities, the iTaksi project is also promoted as a ‘national’ company against its global competitors, such as Uber and Lyft, and the government does not hold any weapon in its fight. Local media reports 691 Uber drivers have been fined TRY 2,532 ($700) by the Turkish National Police for running ‘pirate taxis.’

Istanbul, Europe’s biggest city, has 17,395 licensed taxis, more than the New York City’s yellow cabs, and it is a huge market. A license to operate a standard yellow taxi cab is as high as TRY 1,600,000 ($450,000). According to the contract that now all Istanbul taxi drivers have to sign, iTaksi will take a 4.95 percent commission per each ride, generating an additional $56.6 million for the municipality.

Taxi drivers who are concerned that installing an iTaksi could alienate passengers are threatened with losing their license. Some columnists are also troubled by the Istanbul Municipality—which fails to prevent heavy rains from flooding subway stations and causing deaths—is investing the city’s money into services where private companies already operate.

Istanbul Bar Association and an opposition deputy, Gamze Akkuş İlgezdi, filed legal objections against the iTaksi project on privacy grounds. There is also a separate filing against the Istanbul Municipality for iTaksi creating a monopoly in the city. The project will officially launch city-wide on Aug. 1.