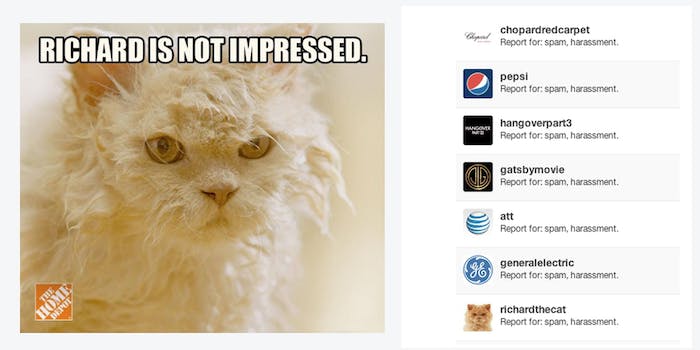 Now that Yahoo has purchased Tumblr, a good deal of speculation has gone into the question of, you know, what the hell Yahoo is going to do with it. A blog post by noted media analyst John Battelle floated the idea that it’s all about Tumblr’s native advertising system, something Yahoo is just beginning to explore.

It’s a difficult thing to find something all of Tumblr can agree on, but a month into Tumblr’s implementation of its mobile-only “sponsored posts” feature, the consensus from Tumblr users is clear: They hate having corporate ads disguised as regular Tumblr posts show up on their mobile apps.

And they especially hate having their dashboards pay court to Home Depot’s ugly orange cat.

Tumblr’s move to introduce corporate sponsored posts, exclusive to its new mobile app, comes just a few months after sunsetting their previous paid-post features, the “highlighted” post and the “pinned” post, which allowed users to pay $3 or $5 to spotlight a post on the dash. Though Tumblr gave no official reason for ending the experiment, which started in June of last year, it may have been anticipating the beginning of corporate sponsored posts.

But if anything, the reaction to sponsored posts from users seems to be even more overwhelmingly negative than the reaction to pinned and highlighted posts. A cursory look at Tumblr’s pinned posts tag shows many users opining the inability to get important news out to their readers via the posts, which “pinned” announcements to the top of a user’s dash.

Meanwhile, the “sponsored posts” tag is a barrage of negativity and complaints:

why am I seeing sponsored posts on my dash?

tumblr? are you okay?

you’re not like the rest of them, remember? you don’t need their approval or their money.

Really not digging the sponsored posts in my dash. I was under the impression that this WASN’T FUCKING FACEBOOK

The complaints appear to be endless. Some users point out that the ads are often totally non-geographically accurate; others note out that ads can pose accessibility issues. At first Tumblr users thought that by simply ignoring the Tumblr accounts behind the sponsored posts they could remove them from their dash. Alas, blocking a sponsored account does nothing to remove the ads from your feed. It also might be significant that Tumblr only made sponsored posts available on its mobile app—a place that popular third-party filtering service Tumblr Savior has yet to infiltrate.

And then there’s the cat problem.

Specifically, the problem with Richard the Cat, a marketing ploy by Home Depot that attempts to combine cat memes with yard work and Tumblr culture. 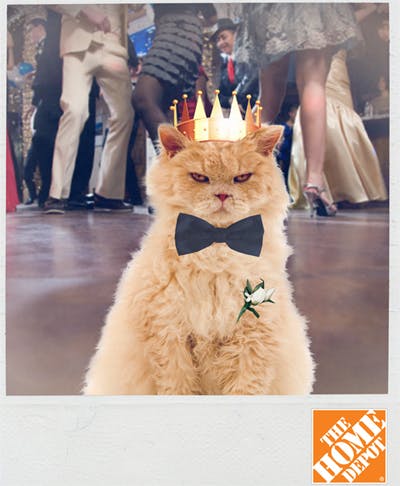 While a couple of Richard the Cat’s Tumblr posts have gone viral, specifically ones connected to Game of Thrones and Star Wars fandoms, most of Home Depot’s sponsored posts appeared to backfire, resulting in post after angry post from annoyed users:

I was going to submit them an image of Richard the Cat bemoaning the corporate world’s awkward attempts at imitating and artificially creating internet culture but you can’t edit the text.

More than other sponsored posts, Richard the Cat seems to have become the focal point of Tumblr users’ annoyance with the ads, perhaps because he is emblematic of the very thing that Tumblr users fear will happen with the Yahoo merger: outsiders to Tumblr (and meme) culture entering their spaces, co-opting them, and attempting to participate in awkward, hamfisted ways.

I’ll tell you one true thing: as soon as I see any “targeted” ads from Yahoo that I can’t block, like those goddamn “sponsored posts” about shit like The Hangover Three, I am out of here.

If native advertising is truly the bright new hope upon which Yahoo is pinning its $1.1 billion assessment of Tumblr’s value, then in addition to winning over Tumblr’s rampant suspicion of its motives, it will have to win them over to a site feature they already seem to loathe.