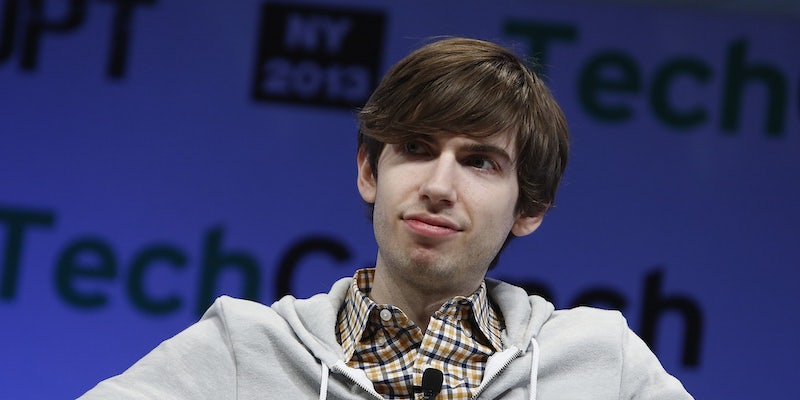 Tumblr cofounder and CEO David Karp has finally broken his silence about the $1.1 billion blockbuster deal between his blogging platform and Yahoo.

Tumblr cofounder and CEO David Karp has finally broken his silence about the $1.1 billion blockbuster deal between his blogging platform and Yahoo, and the 26-year-old multimillionaire has two words to describe it: “F**k yeah.”

“Yahoo is the original Internet company, and Marissa [Yahoo CEO] and her team share our dream to make the Internet the ultimate creative canvas,” Karp wrote on Tumblr. “I couldn’t be more excited to have her help. We also share a vision for Tumblr’s business that doesn’t compromise the community and product we love. Plus both our logos end with punctuation!”

Since Thursday, the Internet has been obsessed with every little detail surrounding this historic deal. Most conversations focused on Tumblr’s ongoing money issues. In 2012 the company, which employs more than 170 people out of its posh downtown offices, “burned through $25 million in 2012 and Facebook, Microsoft and Google, all turned down Karp’s offer to sell after he had trouble adding to Tumblr’s $125 million in cumulative venture capital,” Forbes reported. Karp promised investors the company was on track to net $100 million in 2013, which seemed improbable, considering Tumblr collected only $13 million in the first quarter.

Yahoo held a conference call Monday morning to iron out acquisition details. According to Business Insider, Karp will stay on at Tumblr and report to Yahoo CEO Marissa Mayer and the company will not be expected to “materially contribute to its revenues until sometime in 2014.”

“We promise not to screw it up,” Mayer wrote on her Tumblr blog, complete with a cute custom GIF:

“Tumblr is incredibly special and has a great thing going. We will operate Tumblr independently. … The product roadmap, their team, their wit and irreverence will all remain the same as will their mission to empower creators to make their best work and get it in front of the audience they deserve. Yahoo! will help Tumblr get even better, faster.”