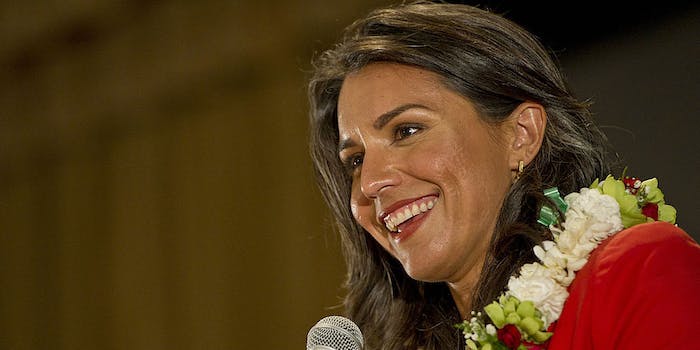 'I cannot remain neutral any longer.'

Gabbard broke the news in an exclusive Meet the Press interview Sunday, stating that she wants “a commander-in-chief who has foresight, who exercises good judgement, who looks beyond…who looks at the consequences of the actions they are looking to take before they take those actions.”

Gabbard, a veteran of the Iraq War, specifically referred to Sanders as a potential leader with a “military mindset” and expressed concerns about “continuing to find ourselves in these failures that end in chaos in the Middle East and in so much loss of life.”

While it may come as a shock to some that a rising Democratic party star would split from the DNC to back a candidate, Gabbard has been publicly clashing with the DNC since October. As the party prepared for the first debate of the presidential election cycle, Gabbard told reporters that she had been asked not to attend the debate as punishment for her criticism of the short debate cycle—which she said unfairly leaned in favor of then-frontrunner Hillary Clinton. According to Gabbard, the arguments occurred with DNC chair Debbie Wasserman Schultz, who in turn flatly denied that such conversations had ever taken place.

“As vice chairman of the DNC, I am required to stay neutral in Democratic primaries, but I cannot remain neutral any longer. The stakes are too high,” said Gabbard in a video posted to her own YouTube page on Sunday.

On Twitter, she kept her announcement brief. According to the Washington Post, Gabbard is one of just four members of Congress to endorse Sanders, joining the ranks of Keith Ellison (D-Minnesota), Raúl Grijalva (D-Arizona), and Peter Welch (D-Vermont).

In comparison, Hillary Clinton has received official endorsements from over 150 members of Congress, all but four Democratic senators, all but six Democratic state governors, and hundreds of DNC members and DNC state chairs (compared to Sanders’ nine DNC endorsements), as well as major issue groups like the Congressional Black Caucus.