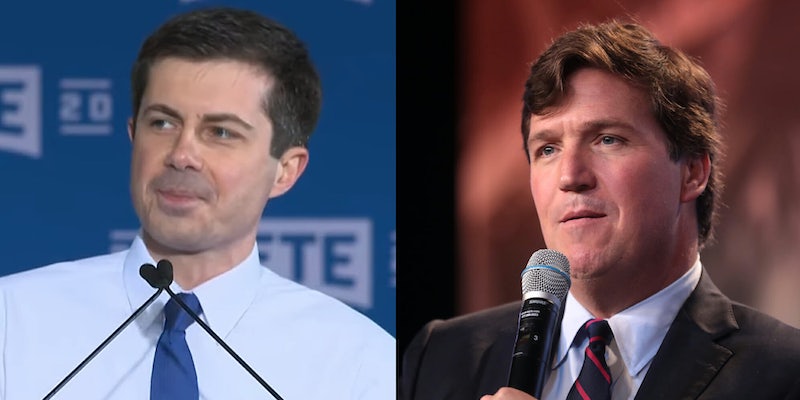 The internet had some thoughts about Carlson's remarks.

Fox News host Tucker Carlson was criticized online on Tuesday evening after he made remarks about Pete Buttigieg, the Indiana mayor and 2020 Democratic hopeful.

Carlson commented on how the media had “left” Beto O’Rourke for a “younger, hotter candidate,” referring to Buttigieg.

The Fox News host then played a number of clips of political shows talking about the Indiana mayor, including someone saying that he was “chicken soup for my soul.”

“‘Chicken soup for my soul?’ Even by the naughty standards of the news media this is a new level of political commitment,” Carlson said. “They don’t just want to vote for this guy. They want to consume him like a hearty stew. Every last drop of Buttigieg. Yum. they’re all in.”

Carlson may have been criticizing the tone of coverage surrounding Buttigieg, who has been rising in recent 2020 Democrats polls, but many people online could not shake the way the Fox News host delivered the line about wanting to “consume” the presidential hopeful like a “hearty stew.”

I would like to file a restraining order against Tucker Carlson on behalf of Pete Buttigieg, please. https://t.co/RNJArDV5qC

What has Tucker Carlson been putting in his stews lately. #Buttigieg