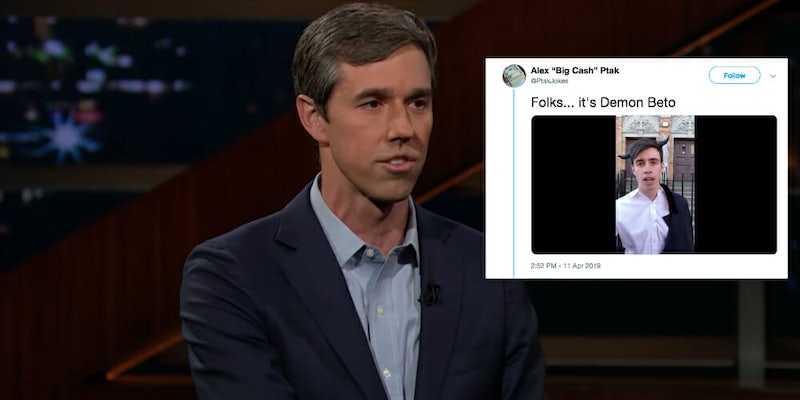 Twitter is obsessed with this demon version of Beto O’Rourke

'Down in Texas when we say 'way down south,' we mean in hell.'

Comedian Alex Ptak brought his own spin on 2020 presidential candidate Beto O’Rourke to Twitter, Mashable reported on Friday. And it seems that take is an evil fiend, because Ptak created “Demon Beto,” and the internet can’t seem to get enough.

Any good politician knows what the people really want.

O’Rourke is a former member of Congress from El Paso, Texas. He’s also a lifelong Texan who fought a close—and expensive—battle against Sen. Ted Cruz (R-Texas) for his Senate seat.

“Down in Texas when we say ‘way down south,’ we mean in hell,” according to Demon Beto.

Finally a democrat I can trust.

hahaha this is so good and also reminded me beto existed!!

Ptak posted the video on Twitter Thursday, and it’s already racked up nearly 78,000 views as of Saturday.

During the 2018 Texas Senate race, Sen. Ted Cruz’s campaign infamously tried to expose O’Rourke for being in a punk band when he was in college.

Demon Beto references real Beto’s punk past in the video: “We are all part of a band, a band called the devil.”

O’Rourke is known for having visited every single district in Texas during his Senate campaign. As a 2020 presidential candidate, O’Rourke has already visited Iowa, Vermont, and South Carolina. And it looks like Demon Beto is hitting the campaign trail, too: “We’re going to Damascus, that’s where the sin gate is.”