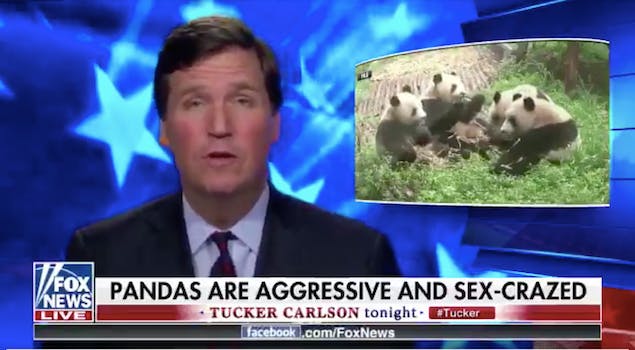 This is ... something wild.

On Monday, news broke that President Donald Trump‘s personal lawyer, Michael Cohen, was raided by the U.S. government in an investigation into possible campaign finance violations. It was covered breathlessly by numerous FAKE NEWS, lamestream websites, and networks, but Fox News knew what the real story was in all this: Pandas who have sex 40 times a day.

Tucker Carlson addressed the matter, under the chyron “Pandas are aggressive and sex-crazed.”

TUCKER IS ON IT pic.twitter.com/UIxHXlWHxF

Tucker was out to debunk the liberal narrative that pandas, who have trouble reproducing in captivity, don’t want to do it.

Per Tucker—on a day when the president’s personal lawyer’s office was raided by the FBI, EPA Director Scott Pruitt was found to be lying about giving staffers’ raises, and Mark Zuckerberg was meeting with representatives on Capitol Hill—pandas fuck.

“You know the official story about pandas—they’re cute, they’re adorably helpless, which is why they’re almost extinct,” Tucker said. “But like a lot of what we hear, that’s a lie. The real panda is a secret stud with a taste for flesh and a fearsome bite.”

“[When] they’re in the wild, male pandas engage in a fierce sexual contest—the winner has sex 40 times in a single afternoon.”

People were, to say the least, confused about the matter.

Tucker Carlson led with Panda sex instead of Michael Cohen and Mueller last night. For real.

Not sure I would describe it as heroic journalism; probably more like journalistic fraud. https://t.co/G24f5yJStz

Wait, was there a fucking panda bear in the offices of the President's attorney when federal agents came charging in with that warrant? Or is Tucker Carlson the exact opposite of a journalist and his broadcast the Platonic ideal of gibbering insanity? https://t.co/2GloibNl1K

Me: Why did they think panda sex would make us forget about Cohen?
Husband: You’re thinking about this too hard.
Me: Not as hard as Tucker Carlson is thinking about it.
Husband: I’m not sure that’s true.

There was no word from government officials if there were pandas in Cohen’s office, fucking rampantly, but it seems doubtful.