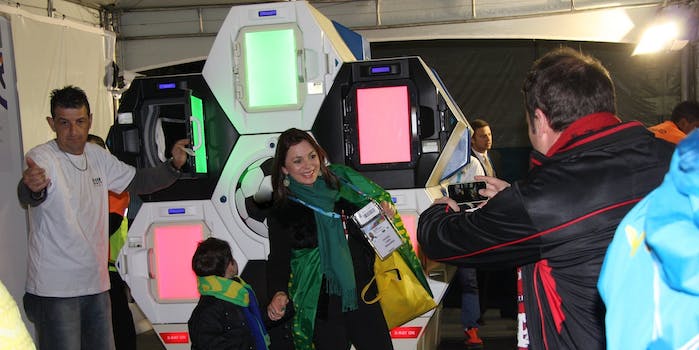 This is the machine that could fix the TSA

Tired of free public massages courtesy of the TSA? This may be the solution.

No one likes the TSA. We’re not even sure if the TSA likes the TSA. Airport security lines are an unmitigated disaster that hasn’t improved in the thirteen years since 2001. Thankfully, a new security-screen machine may soon bring some relief to millions of travelers around the globe.

The Qylatron Entry Experience Solution, developed by Qylur Security Systems, is the latest evolution in homeland security technology destined to replace the archaic (and at times pointless) methods of the TSA. Scan your ticket, and it will assign you one of the five cylinders built around a central sensor, which allows multiple people to use the device at once. Instead of opening your bag, or taking out your laptop, you just put your bag or carry-on into one of the cylinders, walk to the other side, open the door and grab it. The machine will scan your bag for a number of threats without the need to remove anything from it. No one else has to touch it.

After being launched late last year, Qylur still has to prove the Qylatron Entry Experience Solution can work properly and consistently, which is why it was implemented at a 2014 World Cup venue. The machine was used for all matches at the Arena da Baixada stadium in Curitiba, Brazil, which can hold nearly 44,000 people, with great success. “We have made a major impression at arguably the most high-profile sporting event in the world, and have shown the transformation we are bringing to venue security and guest experience,” Lisa Dolev, CEO and founder of Qylur said in a statement. “We look forward to more commercial deployments at large public venues this year.”

The Silicon-Valley based Qylur still has a way to go before its machine may supplement the TSA, but at this rate, the free massage in front of 200 other random, agitated people may soon be a thing of the past.