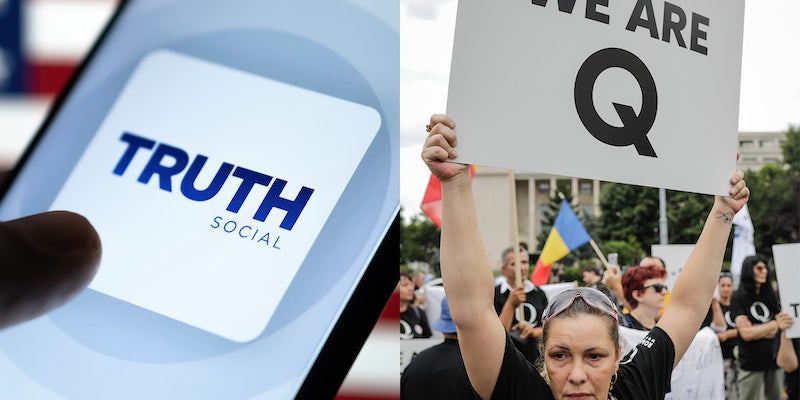 Trump's app has also seen an uptick in violent rhetoric since the FBI Mar-a-Lago raid as well.

The investigation was spearheaded by NewsGuard—a media watchdog organization—and found that Truth Social has verified 47 accounts that promote prominent QAnon conspiracy theories, and that all of those accounts have more than 10,000 followers. NewsGuard found 88 accounts—both unverified and verified—with more than 10,000 followers that promote QAnon conspiracy theories, and more than a third of those accounts have been previously banned from Twitter.

QAnon is the online conspiracy that believes Trump is secretly fighting a war against a cabal of pedophiles that is made up of Democrats and celebrities and that he will one day arrest them all.

Truth Social has plummeted in popularity in recent months and the financial picture of the social media app remains bleak. The company reportedly stopped paying its web hosting service and now owes over $1 million, according to Fox Business.

NewsGuard found that Trump—who has 3.8 million followers on the platform—reposted 30 different QAnon-affiliated accounts a cumulative 65 times since first joining the app in April. The report also found that Truth Social executives were reposting QAnon catchphrases and slogans from their personal accounts.

The report comes at a troubling time for the social media company, as its user base and profitability decline while pressure on it increases. After the FBI raid of Trump’s Mar-a-Lago home in Florida, users on Truth Social began to flood the platform with violent rhetoric, spurring a letter from the House Oversight Committee.

Truth Social did not respond to a request for comment.

On Saturday, the former president responded to recent reports about Truth Social troubles, saying the media was “devastated” by how well the platform is going and was “working overtime to criticize and demean it.” He also claimed that since the FBI raid against him, the platform is “up more than 550%.”

He did not provide any indication of where that number came from or what it means.