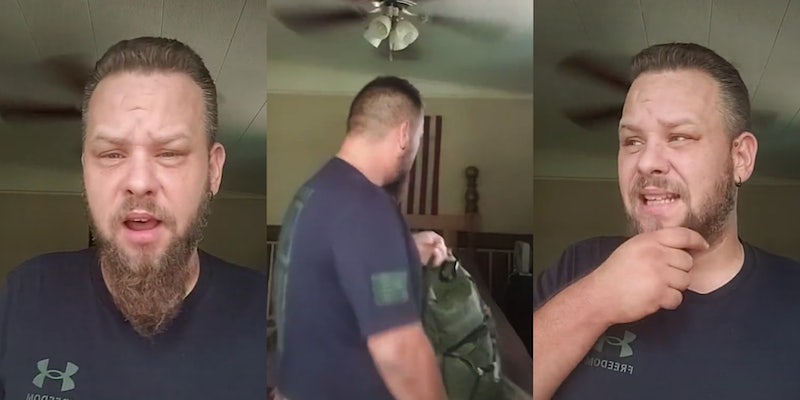 ‘We have guns too’: Trump supporters flood TikTok with threats of civil war

'Yea, it's go time. Everyone knows exactly what I'm talking about.'

Trump supporters are flooding TikTok with videos about civil war in response to numerous political issues including the FBI raid on Mar-a-Lago.

In a long thread this week, left-wing blogger and Twitter user @LivingBlueTX shared more than 40 recent examples of instances in which conservative TikTok users made references to violence.

One such video shows an individual laying weapons and ammunition on his bed while telling his viewers to prepare.

“I seen what happened to Trump,” the TikToker says. “Yea, it’s go time. Everyone knows exactly what I’m talking about.”

Trump’s Florida mansion was raided on Monday by federal agents reportedly in search of classified documents that were removed from the White House. Conservatives immediately viewed the raid as part of a tyrannical effort to deter Trump from running for president in 2024.

Trump responded by boldly calling on the DOJ to release the search warrant, which agreed to do so with the former president’s permission. Yet it was learned shortly after that Trump’s lawyers had been in possession of a copy of the warrant since Monday and could have released it at any time.

The situation grew more dire after reports suggested that the documents in question may have been related to nuclear weapons. In response, Trump immediately began calling the allegations a “hoax” and began to baselessly claim that the FBI may have planted evidence at his home.

Despite the fact that classified information had already been found earlier this year in 15 boxes of records taken from the White House to Mar-a-Lago, many Trump supporters have continued to respond with violent rhetoric.

The calls for violence have already bled into the real world after an armed Trump supporter on Thursday attempted to break into an FBI office in Ohio. The man, who made countless threats on Trump’s Truth Social website ahead of the attack, was shot and killed at the scene.

In another video, one TikTok user can be heard attempting to recruit his viewers into joining his militia.

“I don’t need sheep on my page, I need wolves that will stand with me so that we might fight this corrupt government, these corrupt cops, every fucking corrupt person in this country and bring our country back to the glory it once was,” the user says.

Numerous videos also make reference to the recent claim that the IRS is preparing to hire 87,000 new agents to carry out armed raids against American taxpayers.

The claim surfaced after a climate, healthcare, and tax package passed the Senate on Sunday that includes around $78 billion for the IRS. The $78 billion, however, will be phased in over a 10-year period.

The claim regarding armed agents stems from a Treasury Department estimation in May 2021 that the allocated funds could allow the IRS to hire around 87,000 new employees by 2031, the majority of which would replace current positions and not be armed agents.

Nonetheless, the belief that tens of thousands of armed IRS agents are preparing to descend upon the homes of Trump supporters has ignited calls to violence across TikTok.

“Dear IRS, we the people accept your civil war. We’ve been waiting for this for a long time,” another user says. “If you bring guns to our homes, guess what? We have guns too.”

The Daily Dot reached out to TikTok to inquire about the aforementioned videos but did not receive a reply by press time.

With the Trump raid and IRS story still ongoing and the political divide at an all-time high, it remains unclear what can be done to decrease the current and growing calls to violence.