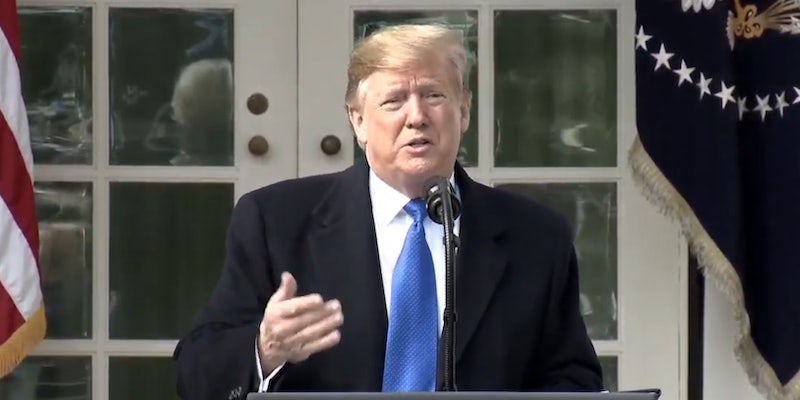 Trump touched on a wide range of seemingly unrelated topics before the announcement.

President Donald Trump announced on Friday morning that he formally declared a national emergency as a mechanism to build his long-desired wall along the country’s southern border.

However, the president announced his decision during a free-wheeling, half-hour long press conference where he spoke about a number of topics including China, trade deals, the economy, and the size of his crowd during a rally in El Paso, Texas, among other things.

The announcement was made without a teleprompter, which left the president starting the highly anticipated remarks by discussing a variety of typical talking points that had nothing to do with the southern border.

In case your wondering: the President is speaking without a TelePrompTer pic.twitter.com/tCL1X3oOul

The wide range of things the president spoke about that was added to the national emergency declaration was not lost on people on Twitter, many of whom criticized the president for it.

This is just a free form MAGA rally speech with a national emergency declaration kind of gaffer taped in there.

Man, this emergency is really taking a backseat to whatever is on Trump’s mind.

What the fuck is he talking about? #Trump #TrumpFakeEmergency

At one point, Trump went on a sing-songy tangent about how the courts would handle his national emergency.

That moment Trump went on about what might happen next:

Trump just seemed to try and do President Xi's accent.

Meanwhile, Rep. Alexandria Ocasio Cortez (D-N.Y.) and Rep. Joaquin Castro (D-Texas) are planning on using Congress to push back against the emergency declaration. The Hill reports the two lawmakers are planning on introducing a bill that would block it.