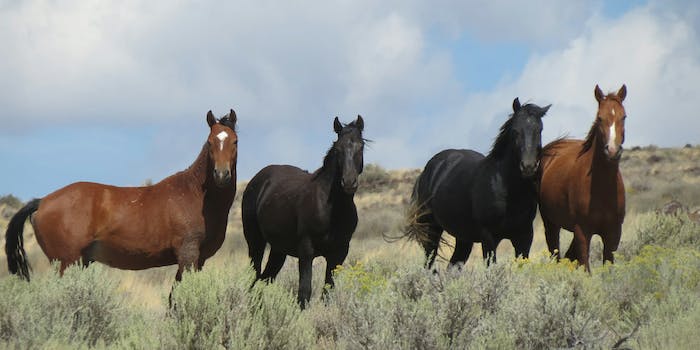 Advocacy groups are not happy with the proposal.

President Donald Trump’s proposed budget would eliminate protections for wild horses, allowing them to be sold for slaughter.

The budget calls for saving $10 million next year by scrapping a protection that forbids buyers of wild horses from selling them for slaughter, according to the Associated Press.

The move, horse advocates say, is meant to appease the livestock industry.

“This is simply a way to placate a very well-funded and vocal livestock lobby,” Laura Leigh, president of the nonprofit protection group Wild Horse Education, told the news agency.

The National Cattlemen’s Beef Association, on the other hand, says the sale of horses for slaughter would free up overcrowding on rangeland managed by the U.S. Bureau of Land Management (BLM), the AP reported.

The budget predicts the $10 million in savings would come from a reduced cost for feeding and containing the horses.

The American Society for the Prevention of Cruelty to Animals was not in favor of Trump’s budget proposal.

“Wild horses can and should be humanely managed on-range using simple fertility control, yet the BLM would rather make these innocent animals pay for draconian budget cuts with their very lives,” ASPCA President Matt Bershadker told AP.

The Wild and Free-Roaming Horses and Burros Act was signed by President Richard Nixon in 1971 and protected the management, protection, and study of horses and burros on public land in the United States. The law made it a crime for anyone to kill the animals on public land.

Trump’s budget, which is not expected to pass through Congress as is, has also been scrutinized for various other provisions, including major cuts that are expected to negatively affect low-income Americans.