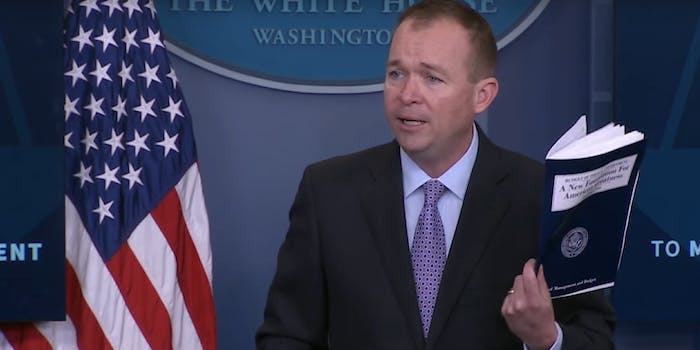 A provision in President Donald Trump’s budget proposal that would cut funding to global health programs would result in at least 1 million people dying in sub-Saharan Africa and elsewhere, researchers say.

The Trump administration has proposed to cut programs that help buy drugs for people infected with the HIV virus around the world by at least one fifth of the current funding, the New York Times reports.

“These are lifesaving interventions, and these levels of reductions will significantly curtail service delivery,” Jen Kates, a vice president at the Kaiser Family Foundation, told the newspaper.

Currently, the programs guarantee that people who test positive for HIV can immediately receive treatment, the Times reported, which not only keeps them alive but helps stop the spread of the virus.

“If you cut the funding by this much, I think there’s a real risk we will backslide, and a whole lot more people will become infected,” Brian Honermann, deputy director at amfAR, told the Times.

Most United States funding for AIDS and HIV treatment comes from a plan enacted in 2004 by former President George W. Bush called the President’s Emergency Plan for AIDS Relief, or Pepfar. The program was expanded by former President Barack Obama. Funds from the program go to more than 60 countries, according to the Times, which would be lowered under the new proposal.

However, the Ryan White HIV/AIDS Program, which was founded in 1990 and is the largest federal program for people who suffer from HIV is among the Department of Health and Human Services’ “highest priorities,” according to NBC News.

Vice President Mike Pence’s website once said Congress should audit programs similar to the Ryan White program “to ensure that federal dollars were no longer being given to organizations that celebrate and encourage the types of behaviors that facilitate the spreading of the HIV virus.”

Trump’s budget proposal also proposes a massive 25 percent cut in food stamps as part of a welfare reform initiative worth $274 billion over the next decade.

The budget is not expected to pass exactly as proposed because Congress has ultimate authority over how the United States government spends money.