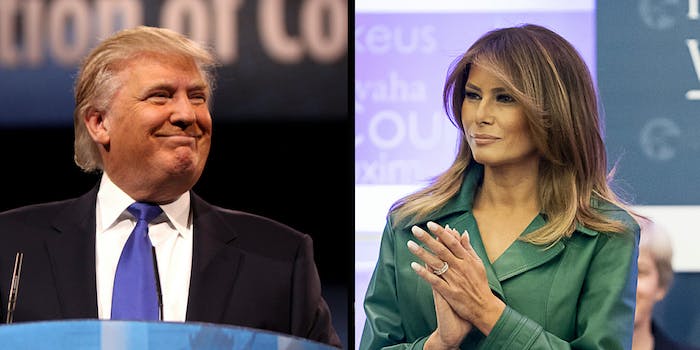 The theory took off again over the weekend.

The “Fake Melania” conspiracy theory has gone on for a while, with people online claiming photos of the president’s wife don’t quite look like her at various public events. The First Lady’s spokesperson denied that she uses a body double in 2017.

In the tweet, the president references his trip to Alabama over the weekend—when the conspiracy theory was reignited.

“The Fake News photoshopped pictures of Melania, then propelled conspiracy theories that it’s actually not her by my side in Alabama and other places. They are only getting more deranged with time!” the president wrote.

The Fake News photoshopped pictures of Melania, then propelled conspiracy theories that it’s actually not her by my side in Alabama and other places. They are only getting more deranged with time!

As the New York Daily News notes, the subject was discussed on The View on Monday. Melania Trump’s spokeswoman, Stephanie Grisham, blasted the segment in a post on Twitter on Monday morning.

.@flotus & @potus traveled to Alabama to pay their respects & comfort victims of the tornado devastation. In typical fashion, @theview chooses to laugh in the face of tragedy. Shameful. https://t.co/KzG2c4Th4a

What’s unclear in the president’s tweet is what he meant by the media photoshopping images of the First Lady. Most of the conspiracy theory lives on social media where people compare screenshots of live images from public events to other photos.

As Snopes wrote in 2017, one of the more widely circulated images looks different because it was filmed while it aired on TV. When the image was compared to the actual footage on CNN’s website, it appears distorted.