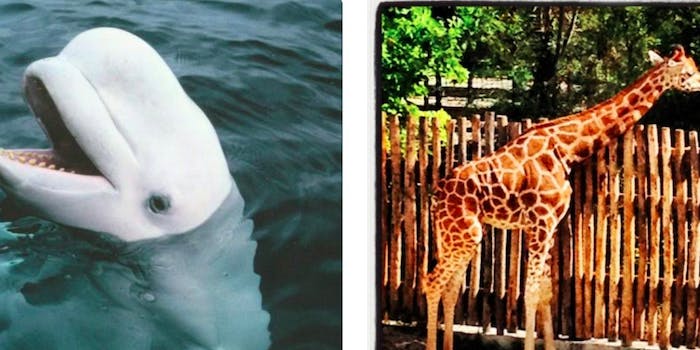 Melania Trump’s infamous whale tweet is now a giraffe, and people are losing it

Do you see a whale or a giraffe?

A six-year-old tweet of a beluga whale posted by First Lady Melania Trump is creating havoc in the Twitter-verse since it mysteriously turned into a picture of a giraffe.

In August 2012 Trump shared a picture of the whale with its head out of the water and its mouth hanging open along with the caption, “What is she thinking?” Little did she know, her husband would run for and become President of the United States, and the tweet would become a meme for those who wonder the same thing about her.

What is she thinking? pic.twitter.com/rFufrgMb

I swear this is not photoshopped. You know the famous Melania Trump “what is she thinking” tweet? You know how it’s, like, a picture of a beluga whale, right? Well, why has it suddenly turned into a giraffe?? Is anyone else seeing this???? pic.twitter.com/7ezImZFTfT

On Saturday people went nuts over the new image associated with the tweet: A giraffe looking over a fence. Same caption, same year, same time, new animal—and Twitter is losing its mind.

I swear this is not photoshopped. You know the famous Melania Trump “what is she thinking” tweet? You know how it’s, like, a picture of a beluga whale, right? Well, why has it suddenly turned into a giraffe?? Is anyone else seeing this???? pic.twitter.com/7ezImZFTfT

Somehow it has now mysteriously become a giraffe

And no one knows how https://t.co/EIRo9DpF5U

Even more insane, some are still seeing the whale, others are seeing the giraffe. It appears to depend on what browsers or devices people are using.

jesus christ. the beluga whale comes up on my Safari and the giraffe is on my Chrome.

Same Melania tweet on my iPhone & my laptop. It renders on mobile as the beluga whale (not dolphin) & on the right is the giraffe. Did she try to activate the Winter Soldier or something? Here's the tweet: https://t.co/SFL2FZomC3 pic.twitter.com/ppmxkwZcdx

in every generation there emerges a fundamental divide…….first it was the blue/black or white/gold dress…..then it was the laurel and yanny audio…..now it’s the beluga whale vs. giraffe Melania tweet

But what does it all mean?

Well, there is a pretty reasonable explanation for why the tweet image has changed. To find out, let’s take a look back into internet history.

Yup, that’s not a photo of his grandsons.

All 5+ year old accounts should be concerned tbh. My guess is that the twitpic URL (that existed at the time) changed hosts and then the (probably legitimate) photo became that

Deadspin went on to explain that this was most likely the case of an expired URL being reassigned. The same thing that changed a photo of Billy Williams and his grandkids to one of this naked blurry woman may have affected Melania Trump’s whale.

This has actually happened to dozens of tweets from sports teams including the Dallas Cowboys, the Philadelphia Eagles, and the New York Jets. Strangely enough, all of them are also from August 2012 as well, Deadspin points out.

But despite a logical explanation for the photo swap, Twitter users couldn’t help but come up with conspiracy theories about the new image.

all i'm saying it we have *ONE* electric-blue-lights-in-the-sky event in nyc and now dolphins are becoming giraffes!!!!!

war is peace; freedom is slavery; whale is giraffe pic.twitter.com/CdyZ6ZP4yZ

Whatever the reason for the change, we’re glad this meme is getting the renewed attention it deserves.