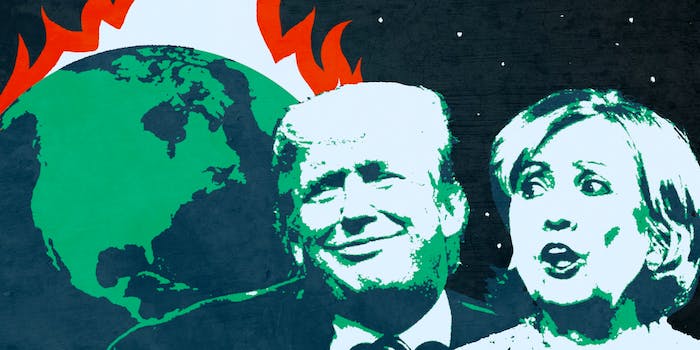 How do Clinton and Trump stack up on environmental issues?

Is the policy really greener on the other side of the aisle?

A 2015 Gallup poll shows that the percentage of Americans who are very concerned about the environment is dropping, but environmental issues remain a key window into what a politician values as important—and the issues aren’t going away.

So, where do the two most likely presidential candidates, Republican Donald Trump and Democrat Hillary Clinton, stand on environmental issues?

In sizing up Clinton and Trump, it’s easy to see the two candidates’ positions as largely representative of their respective parties. Clinton is generally in favor of pushing an environmental agenda, although it hasn’t been at the forefront of her efforts in Washington. While Trump may differ from GOP orthodoxy in some areas, most notably free trade, his environmental positions are generally consistent with the anti-regulatory rhetoric the Republican Party has pushed for generations about environmental regulations hampering the ability of businesses earn profits, which takes precedent over protecting the natural environment.

Back in 2009, a full-page ad appeared in the New York Times. Signed by dozens of business leaders ranging from Vanity Fair editor Graydon Carter to both Ben and Jerry of Ben & Jerry’s, the ad was an open letter supporting President Barack Obama‘s efforts to combat climate change.

“We support your effort to ensure meaningful and effective measures to combat climate change, an immediate challenge facing the United States and the world today,” the letter read. “Please don’t postpone the earth. If we fail to act now, it is scientifically irrefutable that there will be catastrophic and irreversible consequences for humanity and our planet.”

One of the signatories of that letter, along with two of his children, was presumptive Republican presidential nominee Donald Trump.

Yet, three years later, Trump had changed his tune.

Much like 2012 Trump, and unlike 2009 Trump, 2016 Trump is deeply skeptical of human-caused climate change, which the scientific literate overwhelmingly agrees is a real thing.

In an interview with the Washington Post editorial board earlier this year, Trump asserted that he’s “not a big believer in man-made climate change,” while admitting that there has been “a change in the weather.”

Instead, he said that focusing on climate change distracts from more important issues like nuclear proliferation.

On Twitter, Trump has repeatedly labeled anthropogenic—meaning caused by human activity—climate change a hoax and used individual examples of cold weather as evidence that man-made climate change is a fraud.

Ice storm rolls from Texas to Tennessee – I'm in Los Angeles and it's freezing. Global warming is a total, and very expensive, hoax!

It’s snowing & freezing in NYC. What the hell ever happened to global warming?

Speaking before an assembled crowd at the Trump National Golf Course in Winchester, New York, in 2013, Trump said that year’s particularly frigid winter should have inspired the revocation of former U.S. Vice President Al Gore’s Nobel Prize for promoting awareness of climate change. He later backed off the statement, calling it a joke. Despite Trump’s climate-change skepticism, a look at his business interests reveals his real estate empire is open to taking the threat of climate change very seriously. Trump International Golf Links & Hotel in County Clare, Ireland, filed an application to build a seawall that explicitly stated “global warming and its effects” as the reason for the construction.

Trump on the EPA and alternative energy

Trump is broadly against environmental regulations across the board, arguing that such rules largely serve to hamper the economy. In an interview with Fox News host Chris Wallace last year, Trump said he would cut funding to the Environmental Protection Agency. “What … [the EPA does] is a disgrace. Every week they come out with new regulations. They’re making it impossible.”

“We’ll be fine with the environment,” Trump continued. “We can leave a little bit, but you can’t destroy businesses.”

As far as Trump’s larger energy policy, there’s a reason former Alaska Gov. Sarah Palin, who ran for vice president on the “Drill Baby, Drill” platform, has been angling for the job of Energy Secretary in a Trump administration—even though the Department of the Interior is actually far more involved in deciding where energy production occurs in the United States.

Trump has been a strong supporter of fossil fuel extraction, especially oil and natural gas deposits unlocked by recent advances in fracking technology.

Windmills are destroying every country they touch— and the energy is unreliable and terrible. https://t.co/wxrkXRsv

The core of the billionaire’s antipathy to wind energy may be more personal than ideological. Last year, Trump lost a protracted legal battle to prevent the construction of a wind farm off the cost of Aberdeen, Scotland, that he argues would ruin the ocean views from a luxury golf course he owns in the area.

This opposition doesn’t mean Trump has been, at the very least, open to wind energy when it benefits him. He holds an investment in NextEra Energy, one of the world’s largest producers of renewable power, and, when pressed on the issue by a voter in Iowa, Trump said he would be comfortable providing government subsidies to wind energy firms—a major industry in the state.

Clinton may not be the most stringent environmental crusader in Washington, but her record in government is decidedly greener than Trump’s rhetoric.

Whereas Trump denies climate change, the former secretary of state and New York senator called it “an urgent threat and a defining challenge of our time,” and she has pledged to build on Obama’s plan to bring U.S. carbon emissions 17 percent below their 2005 level by 2020. But environmentalism hasn’t been one of the hallmarks of her political campaigns or decades of public service.

During her tenure in the Senate, Clinton received an 82 percent score from the League of Conservation Voters, which has endorsed her presidential aspirations. She voted in favor of the Climate Security Act, which would have reduced pollution that contributes to climate change and incentivized clean energy development. She voted against an amendment to the National Flood Insurance Reform and Modernization Act that would have lifted the federal moratorium on oil and natural gas drilling in the Arctic National Wildlife Refuge. However, she was also in favor of a bill ending the moratorium on offshore drilling in the Gulf of Mexico.

Where Clinton falters on the environment

A post on Clinton’s campaign website outlines a series of environmental programs she would undertake if election president, including upping fuel efficiency standards on automobiles and appliances, launching a $60 billion “Clean Energy Challenge” to push cities to curb pollution, and pushing renewable energy development to decrease the need for drilling for fossil flues in certain environmentally sensitive areas.

Even so, many environmentalists remain skeptical of Clinton’s commitment to the cause. Prominent author and green activist Bill McKibben penned an open letter to the candidate last year entitled “5 Reasons Environmentalists Distrust Hillary Clinton.”

In the piece, which largely focuses on her time as secretary of state during the first term of the Obama administration, McKibben praised Clinton’s rhetoric but slammed her enthusiasm for fracking (both at home and abroad). He also criticized her inability to provide effective leadership at the 2009 United Nations climate summit in Copenhagen, which failed to produce a meaningful international agreement.

The biggest environmental issue Clinton faced while at the helm of the State Department was the approval of the Keystone XL pipeline. Running from the fracking hub in eastern Alberta, Canada, to refineries on the Gulf coast near Houston, the pipeline was a massive endeavor by the Calgary-based energy giant TransCanada that required the approval of the State Department because it crossed an international boundary.

In 2010, Clinton said she was “inclined” to give the green-light to the $8 billion project. This statement drew the ire of environmentalists, who worried that the construction of the pipeline would increase drilling in the Canadian tar sands, which would release an extremely large quantity of greenhouse gases. Clinton left office well before a decision was made and an inspector general report investigating conflicts of interest in the review process under her tenure found no wrongdoing. Even so, she remained mum on whether or not she believed Keystone XL should be approved until finally coming out against it last year, long after the issue became a major sticking point for green activists within the Democratic party. Obama formally rejected the Keystone XL proposal a few months later.

“Had you known it would become a hornet’s nest, you would doubtless have proceeded more carefully—and in fairness it wasn’t until the process was underway that climate scientists raised their most forceful concerns,” wrote McKibbon. “Still, ugh.”

The 2015 Gallup poll asked respondents what environmental issues they were most concerned about. The single most pressing issue, the only one that cracked 50 percent of people saying they worried about the problem “a great deal,” was the pollution of drinking water. Those fears were brought to a head when news broke about the wholesale contamination of Flint, Michigan’s, drinking water supply.

The Clinton campaign has made a big issue of the situation in Flint, highlighting how cost-cutting by government officials led to a public health crisis in the predominantly African-American city, even going as far as pushing to hold a Democratic presidential debate there. She urged Michigan Gov. Rick Snyder to ask for federal assistance safety restoring Flint’s water supply.

When asked about Flint during a campaign event in Iowa earlier this year, Trump said he didn’t want to talk about it.

Update: The story has been updated to include information about Trump’s golf course.