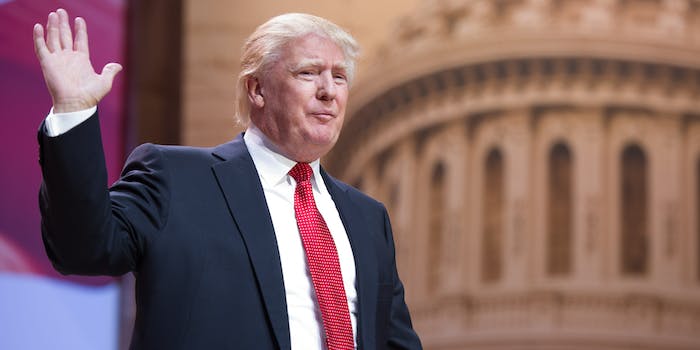 Trump's obsession with the unsubstantiated claims of voter fraud in the 2016 presidential election continues.

Despite being in the middle of a political quagmire after his firing of FBI Director James Comey, Trump is expected to sign an executive order establishing a commission to look into voter fraud and voter suppression, ABC News reported on Thursday. The signing could come as early as today.

The “Presidential Commission on Election Integrity” will be led by Vice President Mike Pence and Secretary of State Kris Kobach, according to ABC.

Trump has harped on voter fraud since before his Electoral College victory—particularly since he lost the popular vote in 2016 by approximately 3 million votes.

Not even a month after defeating Democrat Hillary Clinton in the presidential election, Trump began a tweet storm, claiming he would have won the popular vote if “you deduct the millions of people who voted illegally,” adding in a later tweet that there was “serious voter fraud” in Virginia, New Hampshire, and California.

Again in January, the president tweeted that he would be asking for a “major investigation” into voter fraud.

Several days later, Republicans in Congress, including Rep. Jason Chaffetz (R-Utah), chairman of the House Oversight Committee, who said he didn’t “see any evidence” into Trump’s claim, adding the committee would not be investigating the unsubstantiated assertion by the president.

An analysis of reports of voter fraud by New York University’s Brennan Center for Justice published in January found “that fraud by voters at the polls is vanishingly rare, and does not happen on a scale even close to that necessary to ‘rig’ an election.”

The new “election integrity” commission will be asked to look at “vulnerabilities” in the voting system and “improper voting, fraudulent voter registrations, and fraudulent voting,” an official with knowledge of the announcement told ABC.

The commission is expected to be comprised of both Republicans and Democrats and will also be tasked with examining the issue of voter suppression, officials told ABC.