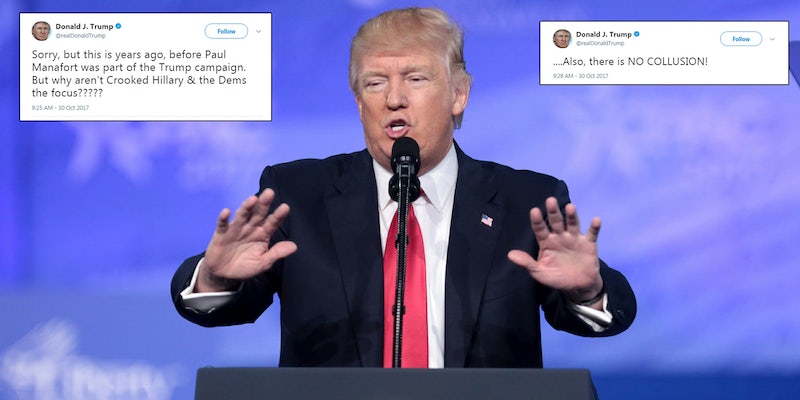 President Donald Trump exploded on Twitter on Monday morning, lashing out against any ideas of possible “collusion” with Russia shortly after the announcements that three people with connections to his presidential campaign were charged by Special Counsel Robert Mueller as part of the ongoing Russia probe.

In his response, the president continued to attempt to push the narrative onto Hillary Clinton, his 2016 Democratic rival, and the Uranium One deal, a theory of “collusion” that is built on dubious claims.

“Sorry, but this is years ago, before Paul Manafort was part of the Trump campaign. But why aren’t Crooked Hillary & the Dems the focus?????” he wrote, before adding three minutes later: “….Also, there is NO COLLUSION!”

Sorry, but this is years ago, before Paul Manafort was part of the Trump campaign. But why aren't Crooked Hillary & the Dems the focus?????

….Also, there is NO COLLUSION!

Within minutes after Trump posted these tweets, however, they would already feel out of date.

Papadopoulos pleaded guilty to making false statements to the FBI regarding his interactions with people who had close connections to Russian government officials. Papadopoulos told the Federal Bureau of Investigation that he spoke with a professor who claimed to know about “thousands of emails” of “dirt” Russia had collected on Clinton before he became an adviser to Trump. Investigators later discovered, however, that he found out that information only after he became a Trump adviser, according to court documents unsealed on Monday.

Papadopoulos’ guilty plea represents the clearest evidence that at least some members of Trump’s campaign were attempting to connect with Russia ahead of the 2016 election.