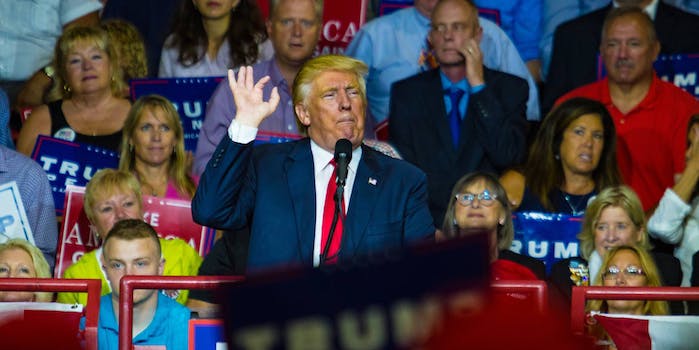 Donald Trump continued his habit of tweeting self-centered reactions to tragedies, this time about Nykjea Aldridge, the cousin of NBA star Dwyane Wade who was killed in Chicago this week.

If there’s anything that Republican presidential nominee Donald Trump has proved he can be relied on for, it’s providing a steady stream of grossly inflammatory, self-absorbed responses to a high-profile tragedies on Twitter.

On Friday, star NBA guard Dwyane Wade announced on Twitter that his cousin, a 32-year-old Chicago mother named Nykea Aldridge, was fatally shot by a stray bullet while walking her baby. Aldridge was an innocent bystander, a slain victim of an unrelated shootout.

And on Saturday morning, Trump responded with characteristic self-obsession, tweeting “Dwayne Wade’s cousin was just shot and killed walking her baby in Chicago. Just what I have been saying. African-Americans will VOTE TRUMP!”

That tweet was subsequently deleted, and replaced with one that spelled the Bulls shooting guard and Chicago native’s first name correctly—it’s Dwyane, not Dwayne. But as Trump and his campaign quickly learned, the problem with that tweet wasn’t really the spelling, but that apparent self-centering of his own political prospects in other people’s griefs and tragedies.

i’m sure Trump got the Wade family’s permission before using Nykea Aldridge’s death in his campaign speech. i’m sure of it.

Imaginethought process behind Trump's Wade tweet. Hears about tragic shooting in Chicago—his first reaction is: I WILL GAIN ENORMOUS POWER.

It came as no surprise that people got riled up by Trump’s reaction. While Wade himself hasn’t offered any public response, as he’s likely busy with far more important things right now, countless political journalists and everyday social media users have taken the real estate magnate to task.

In appearances on cable news morning shows on Sunday, both Republican vice presidential candidate Mike Pence and freshly minted Trump campaign manager Kellyanne Conway spoke out on the controversy, albeit to differing extents. While Pence lambasted the media for making an issue of it, and insisted Trump was merely speaking to the “choice” voters have in a “plainspoken” way, Conway didn’t offer any meaningful defense of the initial tweet, instead trying to draw attention to the condolences tweet which was posted when the backlash was already in full swing.

She also insisted that most Americans don’t pay attention to his Twitter timeline. And on the specific rationale behind Trump’s documented habit of centering himself in moments of tragedy, she offered none.

It’s clear that the Trump campaign realizes litigating their candidate’s Twitter behavior in the public square is not a winning formula, and it’s better to simply point to the later make-good attempt. Of course, there’s no way for the public to know whether Trump even had anything to do with that tweet, restrained as it was. The inflammatory ones typically read quite plainly as Trump’s, both because they sound like him, and because no sensible campaign staffer would deliberately write such things.

Some political journalists have also noted a divide in the tone of the tweets that come from his account depending on what platform they’re sent from, with his Android tweets voicing the straight, unfiltered Trump, while the iPhone tweets tend to be more polished, traditional campaign-style tweets.

In the case of the Wade tweets, as Dave Itzikoff noted on Saturday, the initial offending reaction was sent from an Android phone, while the spelling correction came from an iPhone, and the condolences from an iPad. In other words, if you buy that particular theory, only the first and worst of the trio clearly came from Trump.

It was a pretty tawdry affair all around, although it remains to be seen whether Trump will pay any meaningful price for it. It’s certainly significant that it plays into a pattern of behavior on his part. As Allan Smith and Harrison Jacobs documented for Business Insider on Saturday, Trump also tweeted self-centered or self-congratulatory comments in the aftermath of lethal attacks in Paris, San Bernardino, Brussels, and Orlando.

This is nothing new, but that doesn’t—and shouldn’t—make it any less startling. Suffice to say, Trump’s much-ballyhooed outreach to black Americans is not going so well—not before he tried to exploit Aldridge’s death to puff up his campaign, and damn sure not after.