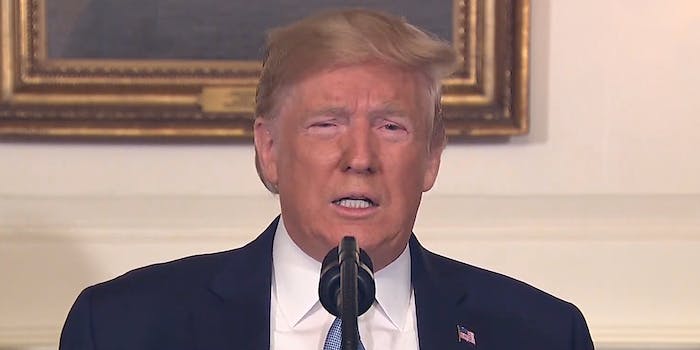 Today, President Donald Trump addressed the media after two mass shootings over the weekend roiled the nation. Speaking from the White House, he said the nation was overcome with “shock, horror and sorrow,” over how 80 people were killed or wounded in mass shootings in El Paso, Texas, and Dayton, Ohio.

Trump called the El Paso shooting the act of a “wicked” man, and that a “twisted monster” acted in Dayton. In the remarks, he called out the El Paso shooter for “racism” and “white supremacy.”

Vowing to respond to the tragedy, Trump proposed a number of suggestions. He repeatedly called out the “internet” in the wake of the shooting for radicalizing people and asked social media companies to develop tools to track shooters before they act. Trump also blamed video games in his remarks and discussed mental health.

“Mental illness and hatred pull the trigger, not the gun,” Trump said, before addressing gun reform, saying he supported “red flag” laws that could take weapons away from people who are considered a danger to others.

But it was his last line that caught the attention of people when he said one city’s name wrong when saying that America should put partisanship aside, and act on these tragedies to honor and remember the victims.

“May God Blass the memory of those who perished in Toledo,” Trump said.

"May God bless the memory of those who perished in Toledo"

I didn't believe it. I had to rewind the DVR three times. He said "may God bless the memory of those who perished in Toledo."

when you definitely haven’t been golfing all weekend while 29 people were murdered by terrorists pic.twitter.com/yqaeqxh8WA

The president screwed up and accidentally said god bless the people of Toledo, instead of Dayton.

But if we wait long enough, there will be a shooting in Toledo too, so keep this on file