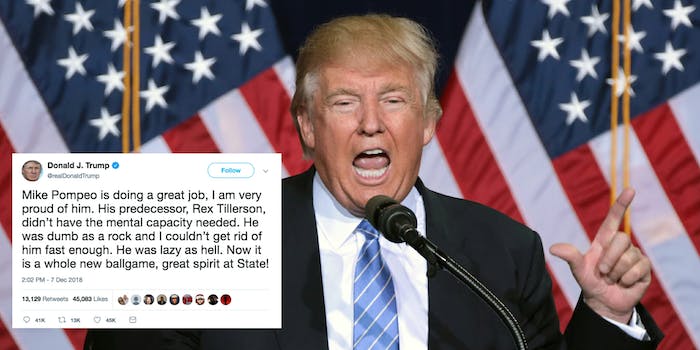 You know what they say about throwing stones.

“Mike Pompeo is doing a great job, I am very proud of him,” Trump wrote. “His predecessor, Rex Tillerson, didn’t have the mental capacity needed. He was dumb as a rock and I couldn’t get rid of him fast enough. He was lazy as hell.”

Trump’s tweet comes the day after Tillerson stated some blunt observations about the president at a fundraising event in Houston, the Hill reports.

“So often, the president would say here’s what I want to do and here’s how I want to do it and I would have to say to him, ‘Mr. President, I understand what you want to do but you can’t do it that way. It violates the law,'” Tillerson said on Thursday.

After Trump’s explosive tweet, many on Twitter pointed out the obvious: It was Trump who hired Tillerson in the first place. He even, as the Hill notes, nominated Tillerson before being sworn in, saying his “broad experience and deep understanding of geopolitics make him an excellent choice for secretary of State.”

And you know what they say about throwing stones.

(Trump did, in an earlier tweet Friday about Robert Mueller and “Leakin’ Lyin’ James Comey” write “bye the way.”)

But as BuzzFeed News’ national security correspondent Vera Bergengruen pointed out, it’s far from the first time Trump has called someone “dumb as a rock.”

A non-exhaustive list of all the people Donald Trump has called "dumb as a rock" on Twitter pic.twitter.com/DuL7SRZJQY

Trump fired Tillerson in March after months of mounting tension over foreign policy, especially in dealings with North Korea. In October, reports claimed Tillerson called Trump a “fucking moron” in a meeting, which he never outwardly denied.